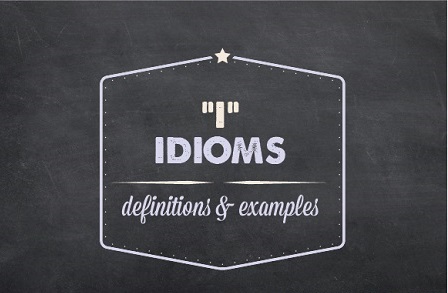 This list of common English idioms starting with the letter "I" gives "in depth" definitions and examples. "In a nutshell," you'll learn a lot. Let's get started. By the way, I've also covered the other letters of the alphabet: click here to go to the main idioms page.

Did you remember that an idiom is a group of words whose meaning is different from the individual words if you looked them up separately in the dictionary?

Okay, let's look at the most common English idioms beginning with "I" (Note: the main word of the idiom begins with the letter "I").

Common English Idioms Beginning with "I"

break the ice:  to start a conversation with someone that you meet for the first time.

(skating/walking) on thin ice:  to be in an uncertain, risky situation.

put something on ice:  to delay something.

icing on the cake:  an extra benefit or additional good thing added to something.

float an idea:  to propose an idea just to see if people are interested.

not have the faintest idea:  to have no understanding about something.

if worst comes to worst:  in the worst possible situation.

in a bad mood:  feeling sad or depressed.

in a bad way:  in a very serious condition; very ill.

in a bind:  in a difficult situation.

in a family way:  pregnant; expecting a baby.

in a hurry:  rushing or moving around quickly.

in a jam:  in trouble or in a difficult situation.

in a jiffy:  quickly or very soon.

in a little bit:  in a short period of time; soon.

in a mad rush:  extremely hurried.

in a nutshell:  in summary.

in a pickle:  in a difficult situation

in a pinch:  something that will work if what’s needed isn’t available.

in a rush:  in a hurry, moving around quickly.

in a rut:  doing the same thing again and again.

in and of itself:  without considering anything else.

in a split second:  very quickly.

in a stupor:  in a confused condition.

in a tight spot:  in a very difficult situation.

in a world of one’s own:  1) In such deep thought you don’t notice anything around you;  2) caring about oneself and not about others.

in advance:  before something happens.

in all likelihood:  most likely, the most probable outcome.

in all shapes and sizes:  in a variety of types and forms.

in any case:  regardless, no matter what happens.

in any event:  regardless, no matter what happens.

in arrears:  to be late with a payment, overdue.

in bad faith:  intending to cause harm or be dishonest.

in bad taste:  not proper or suitable; offensive to others.

in black and white:  in writing.

in broad daylight:  publicly so anyone can see.

in bulk:  in large quantity.

in charge of (someone/something):  responsible for someone or something.

in deep water:  in serious trouble.

in depth:  complete and in detail.

in on something:  to participate in doing something with others.

give an inch:  to partly agree to something.

under the influence:  feeling the effects of alcohol or drugs.

take the initiative:  to be the first one to make an effort to do something.

turn something inside out:  to completely change something.

add insult to injury:  to make a bad situation even worse.

for all intents and purposes:  almost completely, nearly something.

iron something out (iron out something):  to solve the remaining problems.

Have you signed-up for my free newsletter? I include an audio magazine article every month that's filled with helpful new vocabulary and idioms.

You can also find many idiom definitions with one of the online learner's dictionaries.

So now that you've read many of the common English idioms that start with "I," it's a good opportunity to try to write a few sentences by yourself. Why? It's going to help you remember them better.