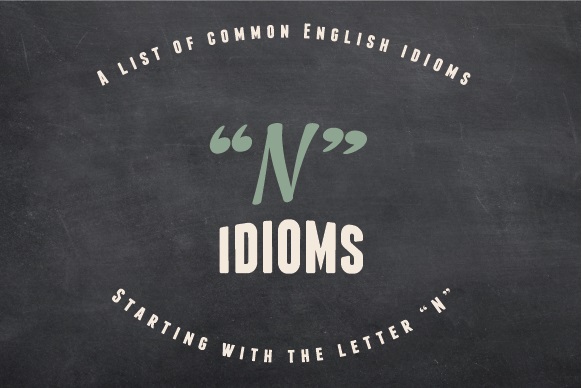 These N idioms will help you “take NOTE of” common idioms beginning with the letter “N.” “In a NUTSHELL,” you need to master idioms to reach a high English level. Before we get started, you hopefully remember what an idiom is, right?

An idiom is a group of words that has a meaning that is different from the individual words that make up the expression. If you looked up the words "in" "a" and "nutshell," you would think it means something inside the shell of a nut. It actually means, "in summary."

So, idioms have to be understood and then memorized. They are not unique to English and I am sure you managed to learn many idioms in your first language. So relax, and remember you don't have to use them a lot when you speak English—it's most important that you understand  them.

This list has expressions beginning with the letter "N"—that is, the main  word in the idiom starts with this letter."  I've also created pages of expressions with other letters of the alphabet:  click here to go to the main idioms page.

hit the nail on the head:  to do or say something exactly right.

nail something down (nail down something):  to determine or fix something.

(a) nail in someone's/something’s coffin:  to help bring the end or death of something more quickly.

clear one’s name:  to prove innocence about something (that you did not do something wrong or illegal).

give something a bad name:  to cause something to not be respected anymore.

in name only:  have a title but not the power or duties required for the role.

in someone’s name:  representing someone (often in honor of someone).

make a name for oneself:  to become famous and known for doing something important or well.

one’s name in lights:  to be famous for some important work (in reference to the brightly lit marquees in front of theaters that have the actors' names in a performance).

the name of the game:  the most important thing or activity.

drop names:  to mention one’s connection to someone famous or influential to try to make oneself also feel important.

call someone names:  to describe someone with rude or insulting words.

name names:  to say the exact name of the person who is doing something wrong.

near and dear to someone:  something that is very special to someone.

break someone’s neck:  1) to make a huge effort, to try very hard: 2) to threaten to harm someone.

breathe down one’s neck:  to pressure someone by watching them closely.

neck and neck:  at the same position or equal.

one’s neck of the woods:  an area or location where you live.

a pain in the neck:  someone or something that's is difficult or annoying.

risk one’s neck:  to do something risky or dangerous.

stick one’s neck out:  to take a risk.

up to one’s neck in something:  to be very busy doing something.

if need be:  if necessary.

(something) is all one needs:  something that you do not want or need at all.

a needle in a haystack:  something that is very difficult to find.

(somewhere) in the neighborhood of something:  approximately.

get on one’s nerves:  to annoy or bother someone.

lose one’s nerve:  to be afraid of doing something;  to lose the courage to do something.

touch a (raw) nerve:  something that is especially irritating or annoying to someone.

break the news:  to inform someone of something bad that has happened.

(that’s) news to someone:  this is the first time the person has heard this information.

next to:  almost, nearly.

next to nothing:  almost nothing, very little.

(just) in the nick of time:  before the very last moment or deadline.

night and day (day and night):  all the time.

get the nod:  to get approval for something.

nod off:  to fall asleep.

a nose for something:  have a talent or ability for finding something.

keep one’s nose clean:  to not get into trouble.

keep one’s nose out of something:  to not get involved in something.

keep one’s nose to the grindstone:  to work very hard without taking a break or being distracted.

look down at someone/something:  to see something or someone as inferior.

nose around:  to try to find information about something.

powder one’s nose:  to go use the toilet (an expression used by women).

stick/poke one’s nose into something:  to intentionally try to find information or get involved in something that is private.

turn one’s nose up at something:  to not like something because you think it’s not good enough for you.

under someone’s nose:  to be very close but not noticed.

not feel like oneself:  to not feel the way one normally feels;  to feel strange.

make a mental note:  to make an effort to remember something you don’t write down on paper.

take note of something:  to pay attention or give attention to something.

compare notes:  to exchange information and opinions about something.

nothing much:  very little.

there’s nothing to it:  it’s easy to do.

at a moment’s notice:  almost immediately.

(on/with) short notice:  with a brief amount of warning.

take notice (of someone/something):  to give attention to something.

(every) now and again:  once in a while;  sometimes.

(every) now and then:  once in a while; sometimes.

(it’s) now or never:  something needs to be done or the opportunity may never happen again.

in a nutshell:  a quick summary of something.

Have you signed-up for my free newsletter? Sometimes I include magazine style articles that are filled with new vocabulary and idioms.

You can also find many idiom definitions with on of the online learner's dictionaries.