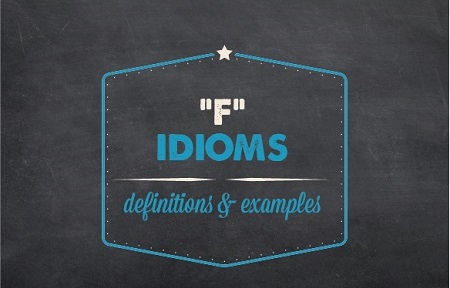 This idiom list contains definitions and examples of idioms that start with the letter "f" (the main word starts with an "f"). If you want to learn idioms beginning with other letters, click here to go to the main idioms page.

An idiom is a group of words whose meaning is different from the individual words if you looked them up separately in the dictionary. Let's "face facts."  Idioms are important. So don't "drag your feet"  any longer. There are many examples in this idiom list and you also get the chance to practice by leaving your own sample sentences in the comments.

blow up in one's face:  your plans fail completely, suddenly and cause more problems.

face to face (with something):  being directly in front of and facing someone or something.

in someone's face:  rudely bothering someone.

(let's) face it:  the need to look at the real solution and accept it.

(let's) face facts:  it's necessary to look at the real situation and accept it.

lose face:  to lose the respect of others.

from/off the face of the earth:  completely gone or disappeared.

put on a brave face:  to pretend or act brave or confident in a situation where one doesn't feel that way.

save face:  to keep the respect of others.

stare someone in the face:  to be obvious and clear.

stuff one's face:  to eat a lot of food.

to tell someone (something) to their face:  directly to someone (especially in person).

(until someone is) blue in the face:  to talk or argue for a very long time.

written all over someone's face:  when one's expression shows their real feelings.

keep a straight face:  to keep one's face expressionless and not smile or laugh.

take something at face value:  to accept something the way that it appears or looks.

without fail:  something that is certain, it always happens.

if all else fails:  if nothing else succeeds or occurs.

fall back on (something):  something else to support someone after problem, failure, etc.

fall for someone:  to fall in love with someone.

fall for something:  to believe something that isn't really true.

fall through:  to not occur as planned.

take the fall for (someone/something):  to take responsibility for something that happened.

as far as:  to the degree or extent that.

by far:  a large degree.

far and wide:  to a great extent or area.

far from it:  far from the real situation; about the opposite of something (used especially to respond to something you think isn't true).

so far:  at/until this time.

so far, so good:  at (until) this point the situation is alright/satisfactory.

bet the farm:  to risk everything one has on something.

seal someone's/something's fate:  something that makes a decision (usually for an unwanted outcome) for someone or something.

tempt fate:  to take a risk because of a foolish idea or belief.

to a fault:  more than is necessary (used to describe a person's good qualities).

ruffle someone's feathers:  to make someone upset or bothered.

a / the feel for something:  to know how or have the ability to do something.

(not) feel like oneself:  to feel (not feel) as happy and healthy as usual.

no hard feelings:  to not be angry about something.

drag one's feet:  to procrastinate or do something very slowly (or not complete it) because you don't want to do it.

one's / both feet on the ground:  to have a clear, realistic understanding of one's situation.

find one's feet:  to become used to or familiar with a new situation or place.

get one's feet wet:  to try it or experience something different or risky (especially for the first time).

jump in with both feet:  to start something quickly and enthusiastically.

knock someone off their feet:  to make someone very happy or surprised.

land on one's feet:  to survive a difficult situation in good condition.

put one's feet up:  to relax and not do anything.

six feet under:  dead and buried.

stand on one's own (two) feet:  be able to take care of and provide for oneself.

sweep someone off their feet:  to make someone fall quickly and completely in love with him.

think on one's feet:  to be able to think and handle a situation quickly.

drink like a fish:  to drink too much alcohol at one time

bear fruit:  to produce a positive or desired result.

More examples of idioms starting with the letter "F" will be added in the future so make sure to sign-up for my free newsletter so you can know when there are new updates.