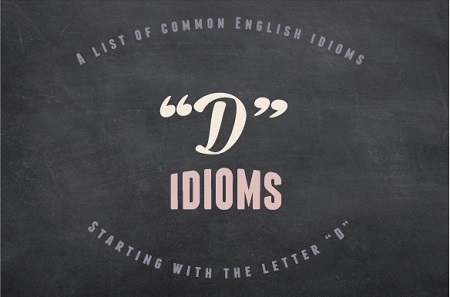 Idiom meanings are sometimes easy to understand and sometimes they are very difficult. An idiom is a group of words whose meaning is different from the individual words if you looked them up separately in the dictionary.

This list of English idioms begin with the letter D! You can find other idioms here at the main page of idiom meanings on this site.

shoot daggers at someone:  to look at someone in a very angry way.

keep someone in the dark:  to not tell someone something or give them information they need.

bring someone up-to-date:  to give someone the most recent information about something.

bring something up-to-date:  to make changes to something so that it includes the most recent information.

keep (someone/something) up-to-date:  to continue giving or adding the most relevant information.

to date:  to or until this time.

dawn on someone:  to suddenly understand, to be clear to someone.

a day late and a dollar short:  not enough and too late to be of use.

as plain as day:   very clear and easy to understand.

call it a day:  to finish something.

day and night (night and day):  all of the time.

day in and day out:  every day repeatedly.

from day one:  from the beginning.

in this day and age:  at this time.

just another day:  a day like every other day.

late in the day:  happening almost too late.

not someone’s day:  a difficult day with a lot of problems.

save the day:  solving a big problem for someone.

the other day:  a recent time ago.

at the end of the day:  after everything else has been considered, in the final analysis; finally.

in broad daylight:  in a way or place that anyone can see what’s happening.

someone’s/something’s days are numbered:  someone or something will not exist or function in a short time from now.

has seen better days:  something is no longer in good condition.

one of those days:  a bad or difficult day.

those were the days:  looking fondly at or happily remembering a time in the past.

dead set against something:  determined not to do or support something.

in the dead of winter:  during the coldest part of the winter.

a done deal:  a decision that has been reached.

a big deal:  something very important.

cut a deal:  to make a special agreement with someone.

bore someone to death:  to not be interesting or be very boring to someone.

love someone to death: to care for someone very strongly.

scare someone to death:  to really frighten someone.

scare (someone) to death:  to be very frightened.

tickle (someone) to death:  to be very amused or think something’s very funny.

deck (someone/something) out:  to decorate something in a special way.

hit the deck:  to drop to the ground and lay down to avoid some type of danger.

stack the deck against someone:  to make arrangements so it’s very difficult for somebody to achieve something.

clear the decks:  finish up less important tasks so that a more important project can be started.

in demand:  something that is needed or desired.

on demand:  at any time something is needed.

in depth:  in great detail or completely.

out of one’s depth:  not knowing a lot about something.

Example:  I took several yoga classes at my gym but when I went to the yoga retreat I was out of my depth.

dog eat dog:  ruthless competition where people will do anything (even harm other people) to succeed at doing something.

rain cats and dogs:  to rain heavily without stopping.

in the doghouse:  in trouble or in a situation where someone is upset or angry with you for some reason.

drink like a fish:  to drink too much alcohol at one time.

a drop in the bucket:  a very small or unimportant amount when compared to something else.

get / have one's ducks in a row:  get well prepared or organized for something that's going to happen.

down in the dumps:  sad, unhappy, discouraged and/or depressed.

More English idiom meanings starting with the letter "D" will be added in the future so check back again soon or sign-up for my free newsletter so you can know when there are new updates.