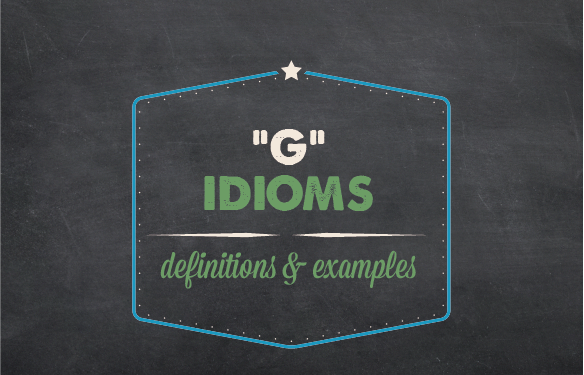 There are many American idioms and this list contains definitions and examples of idioms that start with the letter "G" (the main word in the phrase starts with a "G"). It's a great place to start but don't worry, I've also listed American idioms beginning with other letters and you can click here to go to the main idioms page.

Before you get started, let's make sure that you understand what an idiom is. An idiom is a group of words whose meaning is different from the individual words if you looked them up separately in the dictionary. Let's "get real."  If you really master the English language, you need to learn a lot of idioms.

I've listed some of the most frequently-used American idioms here so you can feel like you're "getting somewhere." You will have to "get it together" and do some studying! So let's "get on with it."  ;)

List of American idioms starting with the letter "G"

ahead of the game:  doing well in a situation and making progress.

back in the game:  to become involved or active in something again.

someone has got game:  to be really good at doing something, especially sports.

play the game:  to act in the way everyone expects.

the only game in town:  there is only one of its type.

gang up on someone:  when several people unite against another person.

run out of gas:  to completely lose the energy to finish something or continue.

step on the gas/step on it:  to work quickly or hurry to complete something.

shift gears / switch gears:  to suddenly stop what you’re doing and do something else.

the genie is out of the bottle:  information is now known to everyone.

get something across / get across something:  to make something understood.

get ahead:  to achieve success in something.

get around something:  to find a different way to avoid a problem or difficult situation.

get around to doing something:  to find and take the time to do something.

get away from it all:  to go to a different place than the usual place (to a place that's less stressful or more peaceful).

get away with something:  to avoid being punished or blamed for doing something wrong.

get back at someone:  to retaliate against someone who did something to you.

get by:  to have just enough to survive.

get in:  to arrive somewhere.

get something in /get in something:  to find the time to do something.

get it together:  to become organized or prepared.

get off easy/lightly:  to not be punished as much as expected.

get on with something:  to start or begin something.

get out of something / get out of doing something:  to avoid having to do something you are supposed to do.

get real:  to be realistic; to see things the way the really are not pretend something else is happening.

get sth out of sb  to cause someone to tell you something or provide information.

get something over with:  to finish something that you don't want to do.

get somewhere/anywhere:  to make progress.

get through to someone:  1) to connect a call and speak to someone on the phone;  2) to make someone understand you.

from the get-go:  from the beginning or start.

give and take:  a situation where a person(s) give something in order to get something from someone else.

give in (to sb/sth):  to agree to something you previously didn't agree to.

give it to someone straight:  to tell someone bad or difficult information honestly and directly.

give or take:  approximately a certain amount.

give out:  1) to be completely finished or not of use anymore; 2) to stop working.

give up:  to stop trying to achieve something and accept failure.

give up something / give something up:  to stop doing or having something.

see the glass half full:  to see a situation as more positive than negative.

see the glass half empty:  to see a situation as more negative then positive.

through rose-colored glasses:  to see things as better than they really are.

glued to something:  concentrating and giving something one's full attention.

go all out:  to put all one's energy and resources into something.

go along with (sb/sth):  to agree to something someone else wants.

go around in circles / go around and around:  1) to move around in a circle;  2) to talk about something without reaching an agreement or decision.

go back on something:  to fail to keep a promise.

go easy on someone:  to be gentle and mild with someone.

go for something: 1) try to obtain or achieve something; 2) to choose something. 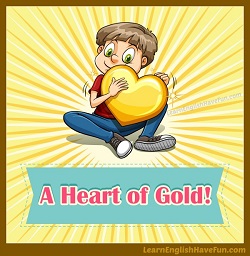 heart of gold:  A person who is kind, caring and generous. 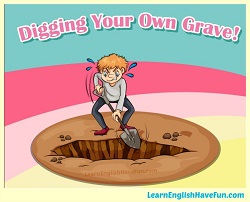 dig one's own grave:  doing something that will cause you to have problems in the future.

More examples of American idioms starting with the letter "G" will be added in the future so make sure to sign-up for my free newsletter so you can know when there are new updates.

You can also find many American idiom definitions with Merriam-Webster's online learner's dictionaries.

I've tried to "get through to you"  just how important idioms are. And now I'm going to "give it to you straight."  You have to practice to learn and remember English. You cannot master the language without using it (and making mistakes).

So now it's your turn to practice. Get a piece of paper and write an example or two by picking any expression from the American idioms list above.