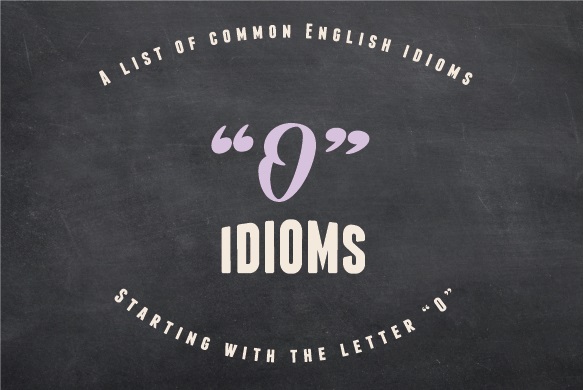 This O idioms list will get you “OFF and running” to mastering the most common expressions. Did it “OCCUR to you” that you only have to understand idioms to reach a high level of English? It’s true!

We do use idioms all the time in English but you can use other words to say the same thing.

So take a deep breath.... you only need to understand them.

Of course, if you are able to use them it will just make  your English that much better!

Before we get started you hopefully remember what an idiom is, right?

An idiom is a group of words that has a meaning that is different from the individual words that make up the expression.

For example, let's look at the idiom "off and running."

If you looked up the words "off" and "running," you would be puzzled and might think "off what?" and "running where?"  But the idiomatic expression "off and running" actually means having a good start and making good progress.

Don't worry, the definitions and example sentences will help you understand these expressions.

You can also practice writing your own sentences and get my feedback below in the comments.

rise to the occasion:  to do what is needed at a particular time.

occur to someone:  to come to someone’s mind, to think of something.

against the odds:  despite a lot of difficulty or challenges.

odds and ends:  a variety of things (often left-over things).

at odds with something:  not in agreement.

off and on (on and off):  working or existing sometimes but not at other times.

no offense:  this is not meant to insult or offend anyone.

the same old same old:  something that has stayed the same as before.

on a diet:  eating particular types and/or amounts of food (especially to lose weight or for medical reasons).

on and on (and on):  continuously without stopping.

on a shoestring:  with very little money or a very small budget.  Example:  I got a second job because the stress of living on a shoestring was killing me.

on the wait/waiting list:  on a list of people waiting for something.  Example:  We were on the waiting list for a two-bedroom apartment in our building for a year and a half and finally decided to move.

all at once:  suddenly, at the same time.

at once:  right away, immediately.

once again:  another time.

once and for all:  finally and completely.

one after the other:  one thing is followed by the next person or thing.

one and only:  only.

one and the same:  the same thing.

one by one:  one thing or person immediately after another.

one up (on something/someone):  to have an advantage over someone/something.

one and only:  the only person or type of thing.

only too:  very, very much.

open to something:  willing to consider something.

open up:  to speak honestly and freely about something personal.

(out) in the open:  to become known to everyone, to be visible for all to see.

wide open:  not decided or determined yet.

out of order:  not working, broken.

out from under (something):  not being controlled by someone else any longer.

out loud:  to voice something so others can hear it.

1) confused/disoriented, not understanding or aware of what’s happening;

2) not a part of something.

on the outs:  not friendly, no longer communicating.

at the outside:  no more than.

over (and done) with:  completed, finished.

over and over:  many times.

overdo it:  to do something too much.

into overdrive:  in a situation where things are working extra hard.

over the moon:  to be extremely happy or pleased.

1) not having support from others

own up (to something/someone):  admit you did something wrong.  Example:  If you had just owned up to taking the car it wouldn’t have been a huge problem but you lied and blamed your sister. 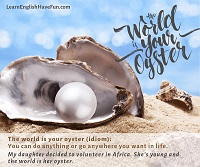 the world is your oyster:  you can do anything or go anywhere you want in life.  Example:  It was so nice to see how all of the graduates felt like the world is their oyster at the graduation ceremony today.

This idiom is the theme of this website:  With English, the world is your oyster. That means if you learn English you will have access to many different things that will enrich your life and bring you lots of different opportunities.

This list has expressions beginning with the letter "O" but I've also created pages of expressions with other letters of the alphabet:  click here to go to the main idioms page.

I've also created some idioms infographics by theme. Check them out!