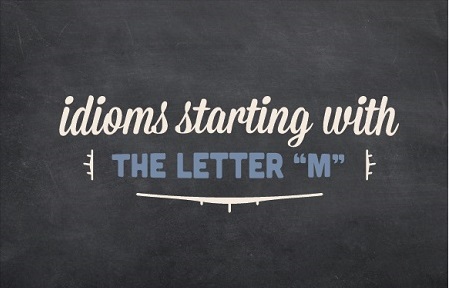 This list of M idioms includes a lot of examples to help you understand the meaning of these expressions. Are you afraid of using idioms? One of my former students told me that idioms actually "MADE her sick." By the end of our lesson I persuaded her that she was "MAKING something out of nothing."

It's just a "MATTER of learning phrases," because you don't have to use idioms a lot in English. "As a MATTER of fact," you just need to understand them when other people use them. "For that MATTER," you can express the same meaning without using idioms.

However, you DO need to understand them.

So here's a list to get you started on some of the most frequently-used M idioms. As you can see, the main  word in the idiom starts with the letter "M."

(By the way: If you're interested, I've also covered the other letters of the alphabet: click here to go to the main idioms page.)

made for each other:  a perfect match;  things that go very well together.

make do:  to use the things that you have even though it is not what you want or need.

make for something:  to produce a result.

make good on something:  to keep a promise;  to do what you say you’re going to do.

make it big:  to achieve great success at something;  to become famous.

make it up to someone:  to do something nice or good to compensate for something you did wrong or failed to do.

make light of something:  to consider something as less important or serious than it actually is.

make off with something:   to steal something.

make or break something:  to cause something to succeed or fail.

make something up (make up something):  1) to create a story or tell a lie about something;  2) to take time to do something you should have done earlier.

make up:  to become friendly after an argument or dispute.

make up something:  to form part of something or a group.

make up for something:  to take the place of something else.

what makes someone tick:  the reasons for someone’s behavior.

in the making:  in progress; in the process of creating something.

of one’s own making:  something caused by one’s own actions.

a man of few words:  a person who does not talk a lot, only when he has something important to say.

a man of his word:  a person who is honest and does what he says he will do.

man enough (to do something):  to be strong or brave enough for something.

map out something (map something out):  to create a detailed plan for something.

put something on the map:  to make something famous.

hit the mark:  to be correct, to reach a goal or be successful.

leave one’s/it’s mark (on someone/something):  to have a positive effect on something that is memorable.

make one’s mark:  to be successful and famous doing something.

mark down something (mark something down):  to lower the price of something.

mark up something (mark something up):  1) to raise the price of something. 2) to make corrections or changes to a document.

off the mark:  not accurate or wrong.

in the market for something:  interested in or looking to buying something.

on the market:  available to have or purchase.

a marriage made in heaven:  a perfect marriage.

a match made in heaven:  a perfect match, something that goes perfectly with something else.

meet one’s match:  to find someone who is equal in ability, skill, etc.

a matter of doing something:  something that must be done.

a matter of life and death:  something that is very serious and important.

a matter of time:  something will eventually happen or become true.

as a matter of fact:  actually, in reality, in truth.

for that matter:  besides, in addition.

no laughing matter:  something that is serious and not a joke.

no matter (what/how/when, etc.):  without considering.

max out (max something out):  to reach the limit of something.

to the max:  to the largest or highest degree of something.

me neither:  and I also am not, I also would not.

mean well:  to have a good or helpful intention.

mean business:  to be serious about something.

(live) beyond one’s means:  more than one’s budget or the amount of money that they have.  Example:  Credit cards make it possible for so many people to live beyond their means.

by all means:  definitely, certainly.

(live) within one’s means:  within a person’s budget or the amount of money that they have.

in the meantime:  at the same time something is happening or during the interval between things that are happening.

for good measure:  something added to something else that has already been done.

measure up (to someone/something):  to be as good as someone or something else.

meet someone halfway:  to compromise with someone by doing half or a good part of what they want.

meet up (with someone):  to see someone in person or join someone for an activity.

make ends meet:  to have enough money to pay for the basic necessities.

melt away:  to disappear or fade away as if it is melting.

money doesn't grow on trees:  it requires effort to earn money and it is limited so you must be careful how you spend it.

a money pit:  something that costs a lot of money over time (more money than was first expected).

(be) over the moon:  to be extremely happy or pleased.

foam at the mouth:  to be extremely angry.

Have you signed-up for my free newsletter?  You'll learn many new vocabulary and idioms each month.

You can also find many idiom definitions by using one of the online learner's dictionaries.