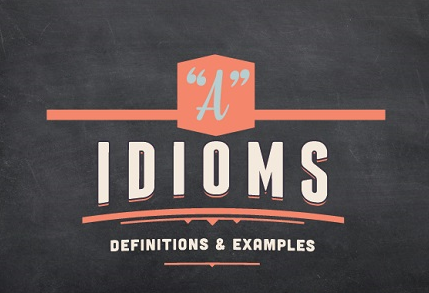 This A idioms list will be continually updated with new definitions and examples, quizzes and other information to help you learn and remember these expressions.

from A to Z:  to include everything.

Example:  Our travel agent planned our vacation from A to Z, including hotels, transportation, meals and sightseeing.

able to do (something) with one’s eyes closed/shut:   to be able to do something easily and effortlessly.

Example:  She’s such a good cook she can  practically cook.

able to do (something) blindfolded:  to be able to do something easily and effortlessly.

Example:  I’ve been driving a motorcycle so many years I could.

Example:  It’s about time  for dinner so please go and wash your hands and then sit at the table.

Example:  I was about to raise my hand in class when Sally shouted out the answer.

above all (else):  the most important thing.

Example:   He loves to drink milk above all else, even more than juice or soda.

above the law:  not having to obey the law or rules.

Example:  Our manager thinks he’s above the law, coming in late every morning but yelling at us if we’re even.

above suspicion:  not believed to have done something wrong.

Example:  My parents always think my sister is above suspicion because she’s the oldest but usually.

none of the above:  all of the items or factors listed before something else.

Example:  Do you want coffee, tea, juice or none of the above?

Example:  My mother’s so absent-minded she not only loses her keys but she also forgets where.

take (something) into account:  to carefully think about or consider something.

Example:  We thought we could drive to the beach in two hours but we didn’t take Friday traffic into account.

act one’s age:  to behave in a way that is right or appropriate for a particular age.

Example:  Our 12-year old refuses to act her age and continues to suck her thumb.

act out:  to behave badly, especially when angry.

Example:  My younger brother always acts out  when he doesn’t get to watch cartoons in the morning.

act up:  (1) to behave badly; (2) to activate or start (especially describing illnesses or problems).

Example:  My daughter always acts up at the supermarket when.

a tough act to follow:  to be so good that the next thing after it doesn’t seem as good in comparison.

Example:  I hope the teacher lets me give my speech first because.

catch someone in the act:  to see or discover someone at the moment they are doing something wrong.

Example:  I tried to quietly walk in the back door to the office because.

clean up one’s act:  to start behaving well or better than before.

Example:  My parents said if I don’t clean up my act and get better grades I won’t be able to continue.

get one’s act together:  to improve poor or bad behavior.

Example:  After skipping class and playing video games my first year in college, I got my act together and.

in action:  working or in progress.

Example:  This Italian restaurant has an open kitchen so you can see the chef in action throwing pizza dough in the air.

take action:  to do or start something.

Example:  After years of complaining, the secretary finally took action and quit her job.

a piece of the action:  to share part of the advantages or profits of something important that’s happening.

Example:  When my brother saw how much money I was making babysitting he wanted a piece of the action.

actions speak louder than words:  what someone does is more important than what they say.

Example:  If you love me, show me—actions speak louder than words.

add up / add up to (something):  to signify or result in something.

Example:  Studying just a few new words a day will add up to a huge vocabulary in just a year.

without further ado:  without talking more about something.

Example:  Without further ado, close your books and let’s begin the test.

take advantage (of something or someone):

to use an opportunity or circumstance to get or achieve something.

Example:  My roommate takes advantage of my dislike.

afraid of one’s own shadow:  to be very frightened (so frightened that the individual would jump if they saw their own shadow in the sun).

Example:  My German Shepard may look like a guard dog but in reality he’s afraid of his own shadow.

after all is said and done:  after everything has finally happened or been said.

Example:  After all is said and done, it was a great holiday even though the airline lost our luggage.

after the fact:  after something has already happened.

Example:  We had to write to the airline after the fact because we forgot to bring our frequent flyer membership.

against one’s will:  without someone’s agreement.

Example:  My father wants me to marry someone he chooses but I will never get married against my will.

against the clock:  in a hurry or trying to complete something before a specific time.

Example:  We worked against the clock to finish the report before the end of the day.

against time:  trying to finish something before a certain time or deadline.

Example:  I hate rushing against time but my manager never gives me the information I need.

ahead of time:  early or before something is required.

Example:  I always arrive ahead of time to all of my appointments to prevent stress.

ahead of the game:  in a position in front of others or in an advantageous position.

Example:  I am always taking new training courses so I can stay ahead of the game.

clear the air:  to explain something to remove doubts or misunderstanding about something.

Example:  I asked my supervisor for a meeting so I could clear the air.

disappear / vanish into thin air:  to be gone quickly and completely.

Example:  When I asked my roommates to help me clean our apartment everyone vanished into thin air.

in the air:  everywhere; able to be noticed or felt.

Example:  Spring is in the air, the birds are chirping and the trees are blooming.

off the air:  not currently being broadcast on the radio or television.

Example:  The television announcers seemed to be happy colleagues but off the air they were bitter.

on the air:  broadcasting on the television or radio.

Example:  There are several Spanish television programs on the air on AM radio.

air one’s dirty laundry (in public):  to talk about something that should be kept private.

Example:  I hate going to family reunions because my uncle always airs his dirty laundry in public.

out of thin air:   from nowhere, from nothing.

Example:  When my students are late for class they make up excuses out of thin air.

up in the air:  not decided, developed or finalized.

Example:  Our plans for the summer holiday are still up in the air  because my boss hasn’t approved my vacation request.

rolling in the aisles:  laughing loudly or uncontrollably.

Example:  We went to the comedy club last night and one of the comedians had everyone rolling in the aisles.

alive and kicking:  alive and well (healthy), in working condition.

Example:  I’ve been driving my car every day for fifteen years but it’s still alive and kicking.

all along:  the entire or whole time.

Example:  I got divorced because my husband was cheating on me all along with his old girlfriend.

all at once:  happening suddenly or at one time.

Example:  It was really sunny when we started our walk but all at once the sky turned dark grey and it started raining really hard.

all ears:  to listen carefully and attentively.

Example:  Everyone on the plane was all ears when pilot said we had to make an emergency landing.

all eyes are on something / someone:  everyone is carefully watching something to see what will happen.

Example:  Whenever I go out with my friend Sally, who's a model, all eyes are on us.

all thumbs:  clumsy or awkward in doing or using something.

Example:  I’m all thumbs with arts and crafts but my daughter is great at it.

all very well:  good but not good enough.

Example:  It’s all very well that you’re eating better but you also have to exercise if you want to lose weight.

Example:  My adviser was not at all happy with my research paper because it lacked primary sources.

Example:  What a jerk! I cannot believe he left her at the alter. How humiliating!

ants in one's pants:  to be so excited, nervous or anxious about something that it's hard to be still and calm.

Example:  It's been raining for five days in a row and my kids really have ants in their pants from staying inside all day.

More A idioms will be added in the future so check back frequently or sign-up for my free newsletter to learn about new updates to my website.