Examples of Idioms
Starting with the Letter "E" 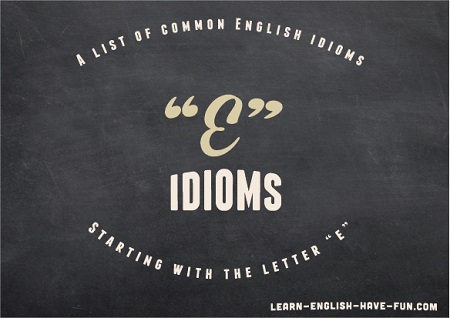 This page is full of examples of idioms that start with the letter "e" (the main word starts with an "e") but if you want to see other idioms click here to go to the main idioms page.

You probably already know that an idiom is a group of words whose meaning is different from the individual words if you looked them up separately in the dictionary. That's why it helps to see examples of idioms. It's also a great idea to try to practice creating sample sentences yourself. You can do that in the comments section and I will correct your example if needed.

to each one's own:  each person has his or her own opinion and/or way of doing something.

grin (smile) from ear to ear:  to make a huge smile.

have an ear for something:  to be good at hearing and repeating sounds in speech or in music.

have someone's ear:  to have access to speak to someone and express one's opinion.

in one ear and out the other:  when a person hears something and doesn't remember it.

keep an ear out (for someone/something):  to actively try to hear something.

play it by ear:  to handle a situation as it happens without making a plan in advance.

turn a deaf ear (to something):  to not listen to what someone is saying.

get an earful:  to have to listen to someone talk a long time about something.

all ears:  ready and eager to listen to what someone is saying.

not believe one's ears:  to be very surprised about something you hear.

fall on deaf ears:  when something someone says is completely ignored.

early on:  a short time after something has started.

it's early days (yet):  it's too soon to decide about something or make a judgment.

wet behind the ears:  young, immature or not experienced.

music to someone's ears:  information that someone is glad to hear.

at ease:  feeling relaxed and comfortable.

eat someone alive:  to make someone feel pain, guilt or suffer.

eat away at something:  to make something a little smaller and smaller over time.

eat something up:  to really like or enjoy something.

eat crow:  to admit in front of other people that you were wrong about something.

eat like a horse:  to frequently eat a large amount of food.

eat like a pig:  to eat with poor manners (e.g., chew with one's mouth open, make loud noises with one's lips, put a lot of food at one time in one's mouth).

eat someone out of house and home:  to eat a lot of food when you're at someone's home.

eat one's words:  to admit being wrong about something.

(keep someone) on/at the edge of their seat:  to remain interested and excited about something because they don't know what's going to happen.

lose one's edge:  to no longer have the skills or ability to be as successful as before.

on edge:  nervous, worried or agitated.

on the cutting edge (of something):  something that is the first of a new technology, etc.

live on the edge:  1) to be very poor; 2) to be in a difficult and uncertain situation that could be dangerous.

take the edge off:  to minimize the effect of something that's uncomfortable or unpleasant.

put all one's eggs in one basket:  to risk everything you have in a situation (e.g., money, reputation, chances) by putting everything into that one idea or plan.

walking on eggshells:  being very careful not to anger or upset someone.

in one's element:  comfortable doing something one likes and is good at.

running on empty:  having little energy and will to do something. (Like a car that has an almost empty gas tank.)

at one's wit's end:  so completely frustrated and upset that you're unsure what to do.

end of / end of story (spoken in informal English):  there is no more discussion about an issue.

end up:  to reach a final place or situation.

get the short end of the stick:  to get the inferior or less favorable result of a situation compared to someone else.

go off the deep end:  to be so upset that one cannot control one's emotions and actions.

in the end:  finally, the final result.

ever/never hear the end (of it):  to have to listen to someone talk about something annoying for a long period of time.

no end in sight:  it seems impossible for a situation to change or stop.

not the end of the world:  not the worst possible thing or situation.

on end:  continuously for a period of time (e.g., hours, days, weeks, years).

on the receiving end:  getting the undesired or unpleasant effects of something.

end of the road:  the final part of something.

to the bitter end:  to continue doing something (that's often unpleasant) until you reach the very end.

More examples of idioms starting with the letter "E" will be added in the future so check back again soon or sign-up for my free newsletter so you can know when there are new updates.