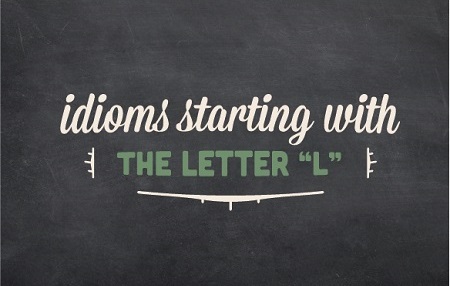 This L idioms list is complete with definitions and several examples for each expression.  Each idiom on this list has a main word that begins with the letter "L." Don't worry, I've also provided the most frequently used idioms for words beginning with other letters of the alphabet: click here to go to the main idioms page.

Before we get started, remember that an idiom is a group of words whose meaning is different from the individual words if you looked them up separately in the dictionary. Now, let's take a look at the most popular L idioms.

a labor of love:  work that you do because you really enjoy it.

land on one’s feet:  to be in a good or better situation after going through a difficult experience.

speak the same language:  to share the same beliefs, ideas and opinions.

fall into one’s lap:  to obtain or achieve something without working for it.

by and large:  mostly, generally.

last but not least:  something that’s equally as important as other things even though it’s the last thing mentioned.

latch on to someone/something:  to closely follow or be connected to someone or something.

better late than never:  it’s good that something happened now even though it would have been better if it happened earlier.

late in the day:  something that’s delayed a long time or almost too long.

at the latest:  not later than a specified time.

have the last laugh:  to be successful at something others thought you wouldn’t be able to do.

laugh at someone:  to tease or ridicule someone.

laugh off something (laugh something off):  to act or pretend as if something isn’t important or doesn’t bother you.

laugh all the way to the bank:  to be happy about earning a profit doing something.

launch into someone:  to severely criticize someone.

launch into something:  to start doing something with a lot of energy and enthusiasm.

above the law:  not having to obey laws or rules.

lay down the law:  to instruct people about what they have to do in an authoritative way.

lay into someone:  to yell at someone or attack them physically.

lay off (something):  to stop doing or using something.

lay somebody off (lay off someone):  to end a worker’s job (usually because of economic difficulties).

layover (noun or verb):  to make a stop somewhere during travel.

lead someone astray:  to negatively influence someone or cause him to make a mistake.

lead off (something) / lead something off:  to start something.

lead someone on:  to deceive someone and be dishonest (often to get something from them).

leaf through something:  to turn the pages of a book, magazine or other written material briefly looking at the pages.

take a leaf out of someone’s book:  to copy what someone else has done.

turn over a new leaf:  to behave in a different way (usually an improved or better way).

out of one’s league:  trying to do something that one isn’t prepared or qualified for or that isn’t right for the person.

lean over backwards:  to try very hard to do something.

(grow) by leaps and bounds:  to grow a lot very quickly.

a new lease on life:  a new chance to be happy or successful after going through difficulties or hardships.

not in the least:  not in any way.

leave someone alone:  to not bother or annoy someone.

leave something alone:  to not touch something; to not interact or get involved with something.

leave someone hanging:  to keep someone waiting for information, a response, or a decision.

leave someone high and dry:  to be in a difficult situation without any help or support.

leave it at that:  to say or do nothing more about a situation.

leave something open:  to keep something possible or available.

leave out someone/something (leave something/someone out):  to not include someone or something.

leave something to be desired:  to not be as good as you want it to be.

take leave:  to have approved time off from work. 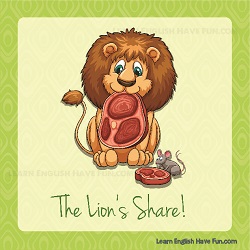 sleep like a log:  to sleep very soundly (deeply)—so well that noises don't even wake you up.

look down on someone something:  to see something or someone as inferior.

look down one's nose at something:  to disapprove of someone or something or look at them as inferior.

get lucky:  1) to come into good fortune or luck; 2) to meet someone to have a casual sexual or romantic encounter with.

third time lucky:  the third time you try to do something you succeed.