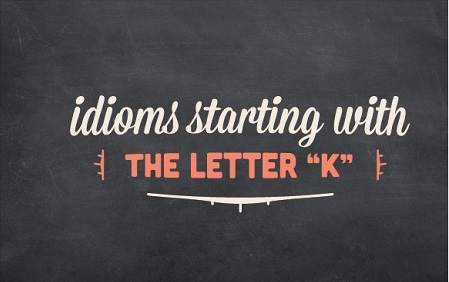 This K idioms list is complete with definitions and examples. Learning idioms can be hard but if you "KEEP at it," "before you KNOW it" you'll learn lots of them!  Each idiom on this list has a main word that begins with the letter "K." If you're interested, I've also covered the other letters of the alphabet: click here to go to the main idioms page.

Before we get started, remember that an idiom is a group of words whose meaning is different from the individual words if you looked them up separately in the dictionary. Now, let's take a look at the most popular K idioms.

keep abreast of something:  to get the most recent information about something.

keep after someone:  to repeatedly remind someone to do something.

keep at something:  to continue to do something.

keep someone down:  to discourage someone or prevent them from doing something.

keep something down (keep down something):  1) to eat or drink something and not vomit afterwards. 2) to stop something from increasing.

keep someone posted:  to update or tell someone whatever new is happening about a situation.

keep to oneself:  to stay by oneself and avoid other people.

keep something to oneself:  to not tell someone about something.

for keeps:  to have something forever.

keyed up:  excited or nervous about something.

get a kick out of something:  to really enjoy something.

1) to start to operate or become effective;

2) to contribute something (especially money).

kick oneself:  to be angry and/or annoyed with oneself.

kick something around (kick around something):  to discuss something.

kick back:  to not do much of anything.

kick off something:  to start something.

kid around:  to joke with someone.

the new kid on the block:  someone who’s recently arrived.

kill time:  to do something while waiting for something/someone.

kill someone with kindness:  to be so nice to someone that they allow you to do or have something.

make a killing:  to earn a lot of money very quickly.

out of kilter:  not working properly.  Example:  Our coffee machine was out of kilter this morning so I had to have tea instead.

in kind:  in the same manner, with the same thing.

one of a kind:  the only item of its type (there isn’t another item like it).

kiss and make up:  to be friendly again after having an argument for disagreement.

kiss and tell:  to talk about someone’s private information in public.

kiss something goodbye (kiss goodbye something):  to end or lose something.

twist the knife:  to make a situation worse by saying or doing something.

(go) under the knife:  to have an operation or medical surgery.

knock it off:  to stop doing something annoying. (Used in spoken English)

knock someone out (knock out someone):  1) to hit someone so hard they become unconscious;  2) to make someone go to sleep.

knock someone up (knock up someone) (rude, slang):  to get someone pregnant.

tie the knot:  to get married.

before you know it:  in a very short period of time.

in the know:  knowing more about something than other people.

know better (than to do something) / not know any better:  to be smart enough to do the right thing or behave in an appropriate way.

know where you stand:  to have a clear understanding of a situation or what someone thinks.

not know what hit you:  to be shocked and confused about something surprising that happens to you.

not know where to turn:  to not know what to do in a situation.

not know whether to laugh or cry:  to be very upset and frustrated about something.

knuckle down:  to work very hard.

Have you signed-up for my free newsletter? I include an audio magazine article every month that's choc full of new vocabulary and idioms.

You can also find many idiom definitions in one of the online learner's dictionaries.

For English learners it's most important to focus on understanding  and remembering idioms. You don't have to worry about using them in speech, especially at the beginning. It's really easy to make mistakes.

It's still a good idea to practice writing your own sentences because this will help clarify your understanding of idioms and also help you remember them better.