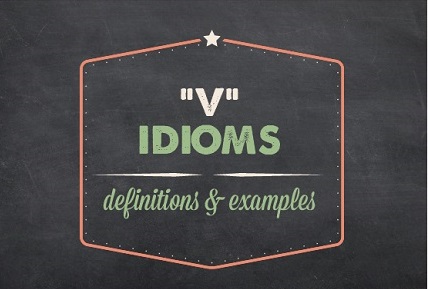 This list of V idioms have a main word that begins with the letter "V." Don't worry, I've also covered the other letters of the alphabet: click here to go to the main idioms page.

Did you remember that an idiom is a group of words whose meaning is different from the individual words if you looked them up separately in the dictionary? Good! Let's look at the most popular V idioms.

in a vacuum:  not connected to other people or events.

Example:  If you write this report in a vacuum you’re going to have a very limited view of the situation.

in vain:  without success.

Example:  I rushed to the airport to catch my flight but arrived in vain as the flight was canceled.

Example:  I turned my back for one moment at the park and in that time my dog had vanished into thin air.

with a vengeance:  with a lot of energy or force.

Example:  After my wife found out someone stole money from her wallet, she came out of the kitchen with a vengeance to ask who took the money.

on the verge:  close to doing or experiencing something.

Example:  I was on the verge of accusing my roommate of stealing my money from the jar in the kitchen when I remembered I’d used it to pay the pizza delivery man.

the very last:  the final part of something.

Example:  We arrived late but were able to see the very last set of the tennis match.

Example:  I was skeptical, but the vitamins the nutritionist recommended were the very thing I needed to get well.

in the vicinity:  an approximate amount, nearly.

Example:  To purchase the home, you’ll need in the vicinity of $50,000 cash as a down payment.

vicious circle:  a set of repeating events and factors that negatively affect the next event.

Example:  Extreme dieting always causes a vicious circle where the dieter initially loses a lot of weight but then gains back more weight than when they first started the diet.

Example:  In view of my fluency in three languages, I think your offer should be increased to $65,000.

on view:  on display where everyone can see something.

Example:  Did you see the art exhibit? There are many famous impressionist paintings on view.

bird’s-eye view:  as seen from above; a broad view of a situation.

Example:  I recommend that you go up to the top floor so you can get a bird’s-eye view of the city.

take a dim view:  to not approve of something; to see something negatively.

Example:  College admission officers normally take a dim view of students who don’t list many extra-curricular activities on their applications.

Example:  She got promoted by virtue of her experience, not because of her great looks.

Example:  I haven’t heard from my mother in two weeks so I’m going to pay her a visit and make sure she’s okay.

a lone voice in the wilderness:  someone who says something that’s not popular; expressing an unpopular opinion.

Example:  At the management meeting, my suggestion to give everyone a small bonus was a lone voice in the wilderness.

fill a (the) void:  to provide or replace something that’s needed.

Example:  She’s been drinking to try to fill the void after her husband left her with two young kids.

speaks volumes:  to express something clearly, to be a clear example of something.

Example:  The dirty looks and silence between them speaks volumes about their relationship.

vouch for something:  to support the truth of something.

Example:   Even though you didn’t see her at her desk, I can vouch that she arrived on time yesterday and went straight to the manager's meeting.

vote something down (vote down something):  to reject something or defeat a vote for something.

Example:  I suggested we hire a new receptionist instead of having an answering service, but management voted the idea down.

You can also find many idiom definitions using an online learner's dictionary.