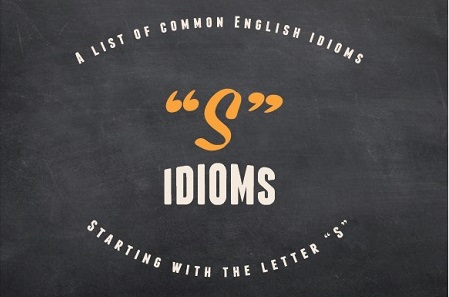 Don’t be “SCARED away” by this list of S idioms. Many learners “SELL themselves short” and “SHY away” from idioms because they’re tricky. Don’t worry, these clear definitions and examples will help!

My recommendation to students is that they just try to understand idioms and notice them at the beginning. It's possible to speak English at a very high level without using a lot of idioms yourself. They can be tricky to use and it's possible to express the same meaning using other phrases.

Although you don't need to use idioms in your own speech, you absolutely have to understand idioms when other people use them to reach an advanced English level. Native English speakers use idioms very frequently. Once you start to notice them, you will see them over and over again (often).

First, let's review what an idiom is:

You'll notice this list has expressions beginning with the letter "S."  The main  word in the idiom starts with an "S". There are also pages of idiomatic expressions with other letters of the alphabet: click here to go to the main idioms page.

back in the saddle:  doing something that you had stopped doing for a while.

in the saddle:   in control of something.

saddle someone / something with something:  to give someone or something a difficult task or responsibility.

safe and sound:  not hurt or injured.

better safe than sorry:  it is more desirable to be careful then to risk a bad result.

in safe hands:  in a situation where someone is taking good care of you.

play it safe:  to not take risks in a situation.

(just) to be on the safe side:  doing something to prevent an unwanted outcome.

(there is/there's) safety in numbers:  being in a group offers security and protection.

easier said than done:  talking about something is not as difficult as doing it.

something to be said for something:  there are reasons why something is desirable or advantageous.

when all is said and done:  when everything has been considered.

set sail:  to start a trip by boat or ship.

for old times’ sake:  a way of doing something to remember something pleasant in the past.

for goodness’ sake / for Pete’s sake:   an expression used in spoken English to emphasize 1) that someone is surprised or amazed by something; 2) that someone is annoyed, irritated or exasperated.

[Note: this is a polite way to express this feeling but you will often hear people say “for God’s sake,” “for Christ’s sake’” or “for f*ck sake” in English—I don’t recommend using them because these expressions can be highly offensive].

rub salt in someone’s wounds:  to make someone feel worse about a situation.

(the) same to you:  [spoken] a polite way to wish the same good thing that someone has said to you. 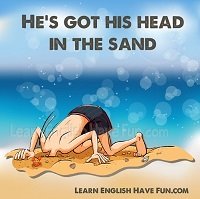 bury (have) one's head in the sand:  to ignore or refuse to think about a problem or something unpleasant.

before you can say something:  very quickly.

have the final say:  to have the authority to make a decision.

it goes without saying:  obviously.

never say never:  you should never say you’ll never do a particular thing ever again.

sorry to say:  I regret having to tell you this.

to say the least:  an expression used to show there’s more you could say about something but you’re not going to say it.

(just) say the word:  an expression used to tell someone to feel comfortable to ask if they need something from you.

need I say more:  it is not necessary to say more about something because it’s already obvious what would be said.

say one’s piece:  to say exactly what you want to say; to be able to express one’s opinion honestly.

scale back something (scale something back):  to reduce or make the size, degree or amount of something smaller.

scale up something (scale something up):  to increase or make the size, degree or amount of something larger.

tip the scales:  to make something more likely to happen.

tip the scales at sth:  to be a particular weight.

scare away sb/sth (scare sb/sth away):  to cause someone or something to go away or stay away.

scare someone/something away from something/doing something:  to cause someone or something to not do something.

scare off someone (scare someone off):  to cause someone or something to go away or stay away.

scare the hell out of someone:  to really frighten someone. 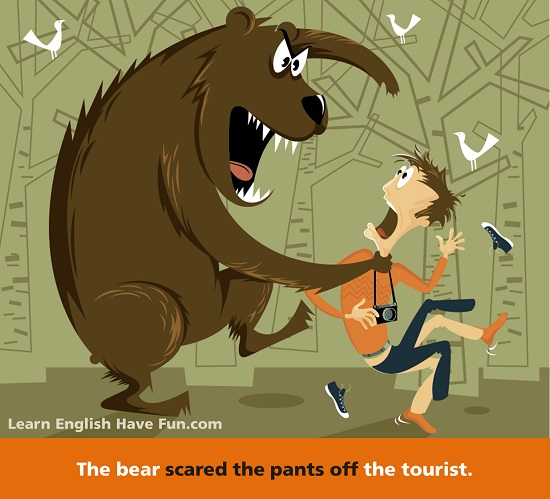 scare the pants off someone (scare someone’s pants off):  to frighten someone.

scare someone to death:  to really frighten someone.

scared stiff:  to be extremely frightened.

burst onto the scene:  to suddenly become famous.

cause/make a scene:  to be very loud in public in a way that disturbs other people.

on the scene:  at a place where something is happening.

set the scene (for something):  1) to make something more likely to happen; 2) to describe the background about a situation.

behind the scenes:  quietly and discreetly so that other people don’t notice.

ahead of schedule:  happening in advance of a deadline, before something was supposed to happen.

behind schedule:  happening after a deadline, later than when something is supposed to happen.

on schedule:  happening on time, at the time something was scheduled to happen.

in the (grand/overall/larger) scheme of things:  looking at the situation in a broader or more general way.

have something down to a science:  to be able to complete a process easily and effortlessly.

settle a/the score:  to retaliate or do something to someone because they did something to hurt you in the past.

score points:  doing something to make people like or support you.

score something:  1) to win something in a competitive activity; 2) to obtain something; 3) to buy drugs illegally.

scrape by:  1) to only have enough money or resources to survive; 2) to almost fail at something.

scrape together something (scrape something together):  to manage to gather or collect something.

from scratch:   from nothing, using basic materials.

up to scratch:  at an accepted standard or quality.

scratch one’s head:  to be puzzled about or have difficulty understanding something.

scratch the surface:  to handle or complete just a small part of something.

sell someone / something short:  to estimate or value something as smaller or less important than it really is. 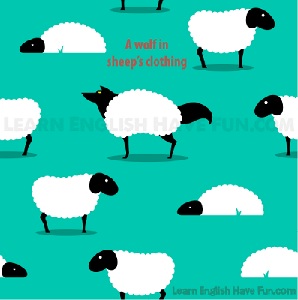 wolf in sheep's clothing:  Someone or something that pretends to be good or friendly but is actually trying to cause damage, harm or take advantage of you... Read more

count sheep:  to imagine sheep and count them jumping over a fence as a way to make yourself go to sleep.

shy away:   to avoid something;  to keep oneself from doing something.

sleep like a log:  to sleep very soundly (deeply)—so well that noises don't even wake you up. 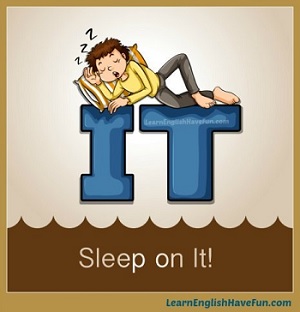 sleep on something:  to wait until the next day (in order to think carefully) before making an important decision.

at a snail's pace:  very slowly.

put a sock in it:  a rude (impolite) way of telling someone to stop talking or be quiet (stop making a lot of noise).

Have you signed-up for my free newsletter? I include an audio magazine article every month that's choc full of new vocabulary and idioms.