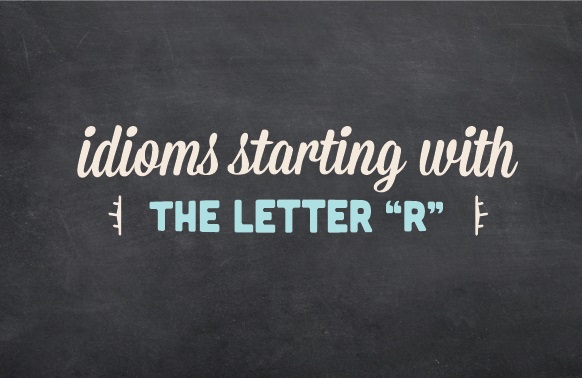 This is a list of common R idioms in English. “In REALITY” idioms can be tricky but “REST assured” that if you study just a few each week you’ll happily “REAP what you sow.”

At first, just try to understand idioms and notice them when other people use them. You can speak English at a very high level without using a lot of idioms yourself. When you feel more comfortable that you truly understand some of these idioms you can use them in your own speech and writing.

You can still speak English at a very high level without using a lot of idioms because can express the same meaning with other words. However, you absolutely have to understand idioms to reach an advanced English level.

Before you go through the list, let's review what an idiom is:

You'll notice this list has expressions beginning with the letter "R."  The main  word in the idiom starts with this an R. There are also pages of idiomatic expressions with other letters of the alphabet:  click here to go to the main idioms page.

rack up something:  1) to accumulate a lot of something; 2) to score a lot of points.

all the rage:  popular or in style.

go off the rails:  to be ruined by poor management.

chasing rainbows:  trying to accomplish something that isn’t practical.

rake in something (rake something in):  to obtain a large amount of something that’s valuable.

ramp up something:  to increase the volume or amount of something.

bet the ranch:  to risk everything you have to try to obtain something.

pull rank:  to use the power of your job or position to get what you want.

join the ranks of something:  to become part of a group.

a king’s ransom:  a large amount of money.

beat the rap:  to avoid punishment.

smell a rat:  to have a feeling something is wrong.

rattle off something (rattle something off):  to quickly say something.

catch some rays (catch a few rays):  to sunbathe, to lie outside in the sun.

reach out (to someone):  to try to communicate with or offer help to someone.

within reach:  something that is possible to do or have.

read up on something:  to read information to learn more about something.

read between the lines:  to discover hidden meaning in something someone says or writes.

reap what you sow:  what you experience is a result of your actions.

bring up the rear:  to be at the back of a group of people going somewhere.

rear its ugly head:  to become a problem that needs to be resolved.

on the rebound:  1) becoming stronger or better;  2) recovering from the ending of a romantic relationship.

for the record:  something that is said publicly and officially.

off the record:  not meant to be known publicly or officially.

on the record:  to make something be known officially and publicly.

set the record straight:  to tell the true facts that haven’t yet been reported.

see red:  to be very angry.

paint the town red:  to go out and have a wild celebration (usually drinking a lot of alcohol).

roll out the red carpet:  to give a special welcome to someone. (Like the red carpet at special events: e.g., movie premieres, award ceremonies, galas).

to give the red carpet treatment:  to treat someone with special care and attention.

reel off something (reel something off):  to say or do things very quickly one after another.

reflect on something:  to carefully think about something.

give someone/something free rein (have free rein):  allow someone / something complete freedom in action or expression.

keep a tight rein on someone/something:  to restrict or control someone or something.

take over the reins:  to take over control of something.

rest assured:  to feel sure or certain that something is going to happen. (The phrase is often used to tell someone else not to worry about something).

Mr. Right:  the man who is the right (perfect / best) person to marry.

on the rocks:  when a relationship is having problems (especially a romantic relationship).

Have you signed-up for my free newsletter?  You'll learn lots of new vocabulary and idioms each month.