Idiom:  Off the Hook 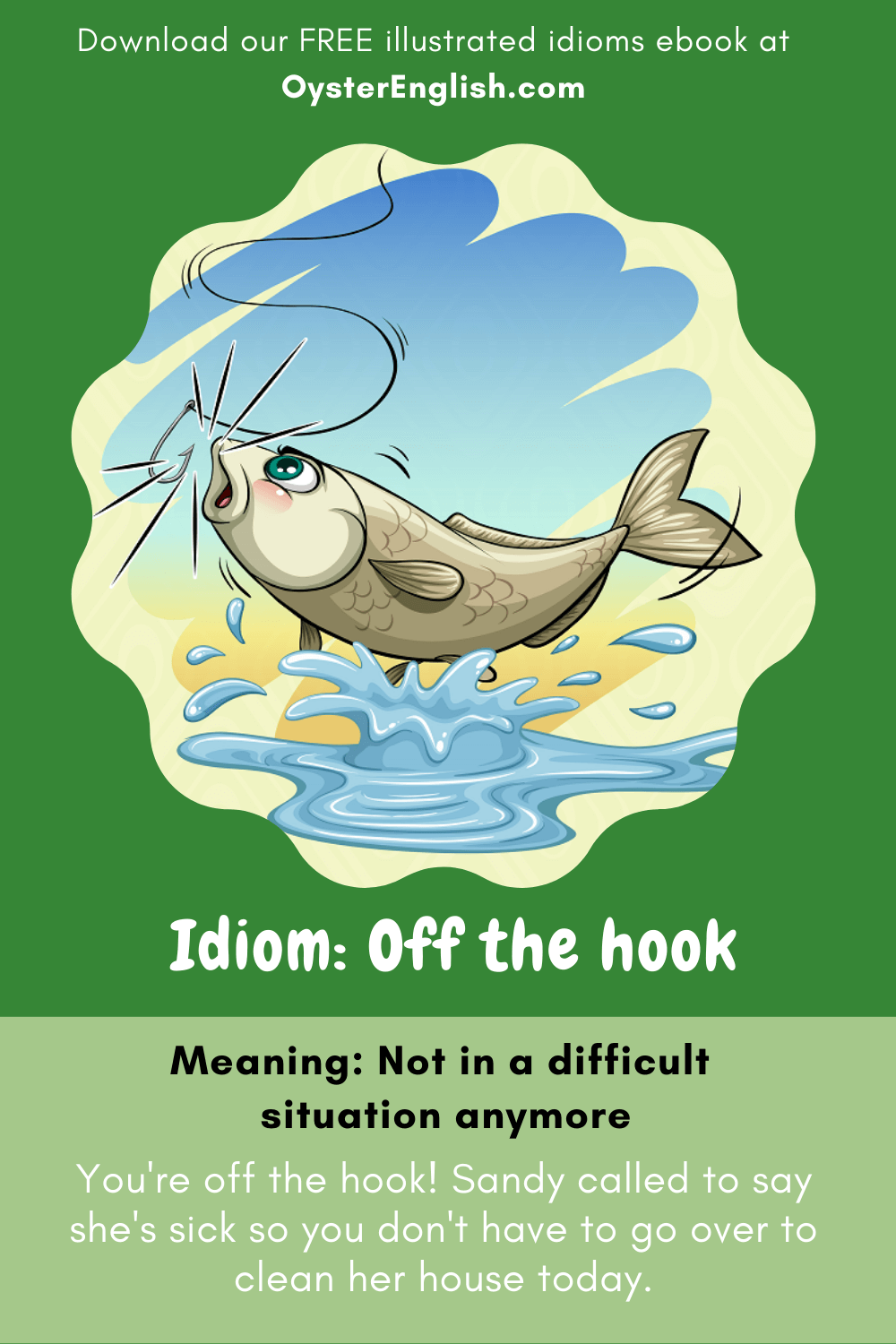 Luckily, this fish is now 'off the hook.'

1) not in a difficult situation anymore;

2) when a telephone receiver is not put correctly on the phone and it prevents incoming calls.

This idiom's origins come from the idea that a fish has found a way to get off the hook of a fishing pole—and has therefore escaped great danger. In the same way, if you get off the hook you've escaped a difficult situation.

Another meaning is that the receiver of a telephone is not connected to the phone. The receiver is placed on the hook of the phone.

When the receiver is ON the hook calls can be received and the phone will ring (make a sound to let you know there is a phone call).

You can intentionally or accidentally take your phone off the hook. Often the phone is off the phone by mistake when the person doesn't carefully put the phone back in place.

Finally, there is a similar idiom:  a phone rings off the hook. This means the phone is ringing continually one call after the other. (Hint: You can remember this by imagining the old phone in the picture above is ringing so much that the hook falls of the phone stand).

— I continually called you last night but kept getting a busy signal. Did you accidentally leave your phone off the hook?

— Yesterday, we got so many phone calls from people asking for donations I finally took the phone off the hook.

— If we get one more call from a telemarketer during dinner, I'm going to take the phone off the hook.

— I was supposed to go with my mother to the doctor's this afternoon but her appointment was canceled so I'm off the hook.

— I'll do the dishes so you're off the hook and can get started on your homework.

— They didn't have enough evidence to prosecute my brother so he's off the hook.

— My teacher gave me detention today after school but luckily there was a fire alarm and she let me off the hook.

— I was supposed to have jury duty all week but I'm off the hook after they learned I have a disabled child.

— Don't worry, my lawyers are working hard to get you off the hook.

— I cannot believe dad let you off the hook from doing your chores again. It's so unfair!

— Thank goodness I'm off the hook from working tomorrow. I asked Jane if she could take over my shift and she agreed.

— You're off the hook! Sandy called to say she's sick so you don't have to go over to clean her house today.

— Are we off the hook or are we still going to your parents' house for dinner on Sunday?

— Since Marissa was featured in the Sports Illustrated swimsuit edition her phone has been ringing off the hook.

— My friend posted my phone number in the men's bathroom as a joke and now my phone's been ringing off the hook. 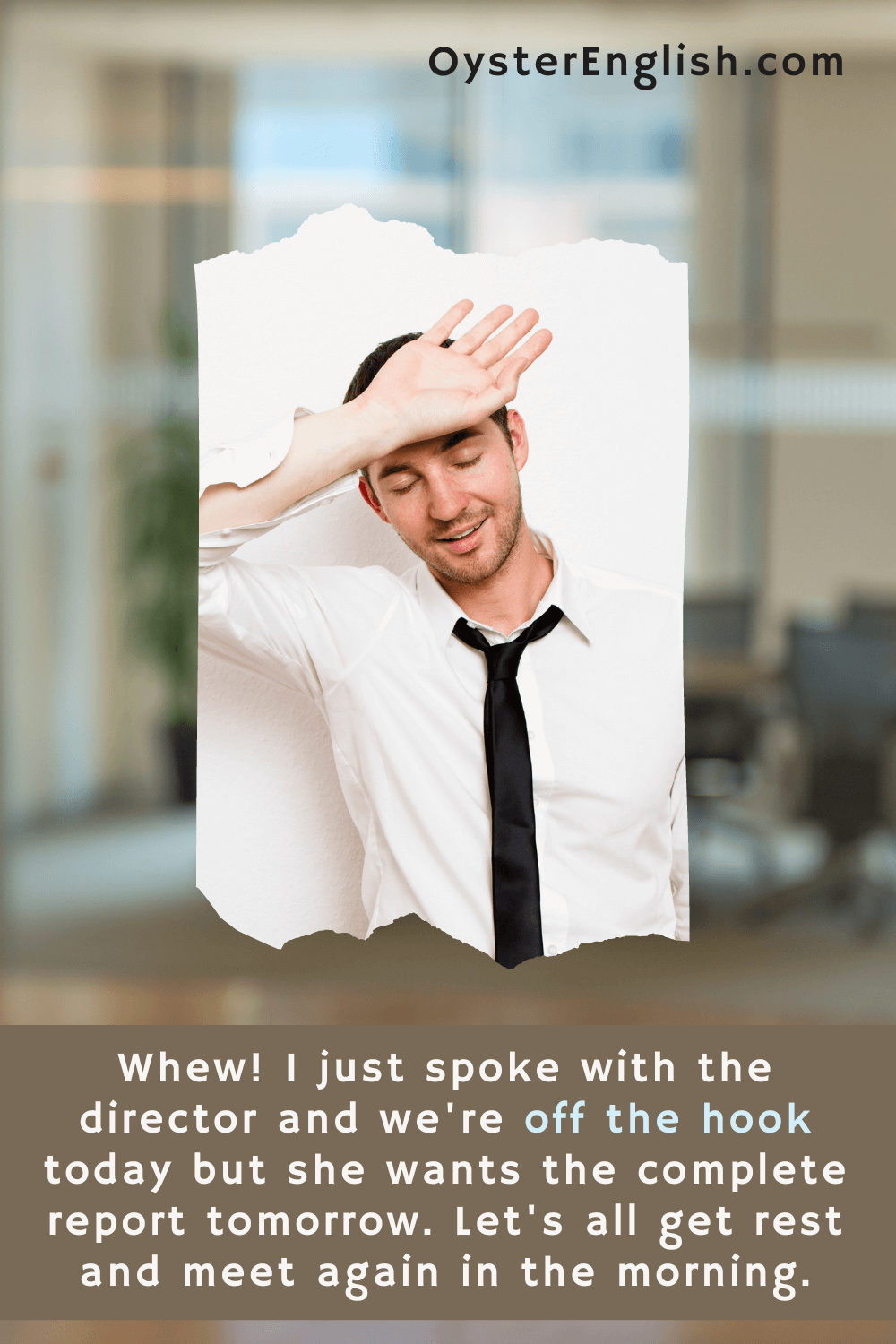 — The phones started ringing off the hook an hour ago when the scandal was announced on the news.

— It looks like we're off the hook for today but Mr. Robins wants the complete report by the end of the day Wednesday.

— You're not off the hook young man. Just because you managed to pass the test doesn't mean you can continue playing video games instead of studying.

— I've been waiting for a call all day and just realized someone left the phone off the hook.

— This suspect has a solid alibi for Thursday evening when the robbery took place so she's off the hook.