Note: Temper tantrums are normal behavior for children aged 1-5 years of age. This behavior can range from crying and whining to screaming, hitting, kicking and flailing their arms and legs wildly. They often happen because the child doesn't have the language skills necessary to communicate their frustration, anger or discomfort.

This expression is not only used for young children. However, when it's used to describe an adult's or older child's behavior, it is indicating the person is acting like a child.

— My husband throws a temper tantrum every time I ask him to carpool the kids to soccer practice.

— Seriously, if you keep throwing temper tantrums for little things like that, you won’t have a boyfriend to complain about.

— The last time my child had a tantrum was while we were trying to board the plane and they refused to let us on the flight.

— That singer is such a diva. She threw a temper tantrum because champagne and flowers weren't in her dressing room.

— Are you going to have a tantrum every time the internet goes out?

— How often does your child have temper tantrums at home and for which reasons?

— Your child is just two years old so it's normal for her to have temper tantrums. It's the only way she knows how to express frustration.

— I don't think my youngest child ever had a single tantrum. She would just rock back and forth and suck her thumb.

— It's really embarrassing when the executive director has a temper tantrum in front of staff. He really needs anger management counseling.

— My parents are so annoying. We're the kids but my mom constantly complains in a baby voice to my dad and my dad has temper tantrums every other day.

— Can you call me back in an hour? Cheryl's throwing a tantrum because her sister got into her makeup again and I need to intervene.

make something out of nothing 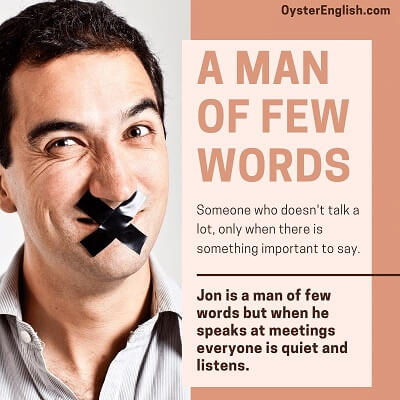 a man of few words