TED Talk Transcript
William Kamkwamba:
How I Harnessed the Wind

You can also watch this talk on TED's website here.

Thank you. Two years ago, I stood on the TED stage in Arusha, Tanzania. I spoke very briefly about one of my proudest creations. It was a simple machine that changed my life.

On the stage that day, I was so nervous. My English lost, I wanted to vomit. (Laughter) I had never been surrounded by so many azungu, white people. (Laughter)

There was a story I wouldn't tell you then. But well, I'm feeling good right now. I would like to share that story today. We have seven children in my family.

All sisters, excepting me. This is me with my dad when I was a little boy.

Before I discovered the wonders of science, I was just a simple farmer in a country of poor farmers. Like everyone else, we grew maize.

One year our fortune turned very bad. In 2001 we experienced an awful famine. Within five months all Malawians began to starve to death.

My family ate one meal per day, at night. Only three swallows of nsima for each one of us.

The food passes through our bodies. We drop down to nothing.

In Malawi, the secondary school, you have to pay school fees. Because of the hunger, I was forced to drop out of school. It was the future I couldn't accept.

I felt very happy to be at the secondary school. I looked at my father and looked at those dry fields. , so I was determined to do anything possible to receive education.

So I went to a library. I read books, science books, especially physics.

I couldn't read English that well.

I used diagrams and pictures to learn the words around them.

Another book put that knowledge in my hands.

It said a windmill could pump water and generate electricity. Pump water meant irrigation, a defense against hunger, which we were experiencing by that time. So I decided I would build one windmill for myself.

But I didn't have materials to use, so I went to a scrap yard where I found my materials.

Many people, including my mother, said I was crazy. (Laughter)

Using a bicycle frame and an old bicycle dynamo, I built my machine. It was one light at first. And then four lights, with switches, and even a circuit breaker, modeled after an electric bell.

Another machine pumps water for irrigation.

Queues of people start lining up at my house (Laughter) to charge their mobile phone. (Applause)

I could not get rid of them. (Laughter)

I had never seen an airplane before. I had never slept in a hotel. So, on stage that day in Arusha, my English lost, I said something like, "I tried. And I made it."

So I would like to say something to all the people out there like me to the Africans, and the poor who are struggling with your dreams:

God bless. Maybe one day you will watch this on the Internet.

I say to you, trust yourself and believe. Whatever happens, don't give up.

At the lower right-hand of the screen there is a drop-down menu that allows you to turn on subtitles (see screen shot below). Most TED talks have a number of different languages available in addition to English.

This can help you understand parts of the video you didn't understand and/or help you to learn new vocabulary words more quickly. 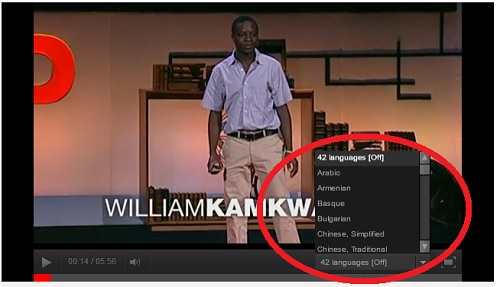