In this lesson, we'll learn English veterinarian phrases, that are actually helpful for human visits to the doctor as well. Animals have many of the same types of medical specialists and illnesses as humans do.

Whenever my cousin goes out of town, we dog-sit (=we look after) her precious dog, Maxine. We’ve been doing this for years so Maxine is like a part of our own family. 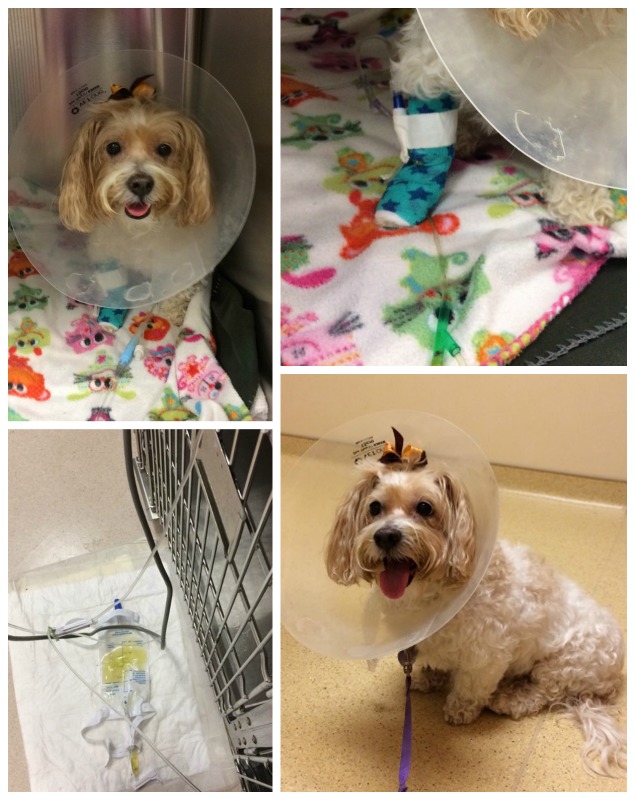 Unfortunately, from the moment she arrived, we could tell that Maxine was not herself.  That is, she was not the happy little playful dog she normally is.  So, we decided to take her to the emergency hospital. Read on to learn what happened.

When we got to the emergency room at the hospital, the veterinarian (=animal doctor) asked us about Maxine’s symptoms. A symptom is a change in your body that shows that you are sick.

We told the vet (this is a short name for veterinarian) that Maxine was trying very hard to urinate but very little urine was coming out.  Urine is the yellow liquid waste that collects in our bladder. We urinate this liquid out of our body.  In every day informal English, it’s very common for people to say “pee” or “peeing” instead of urinating.

Well, Maxie was having a very difficult time urinating (or peeing).  The vet asked us more questions about her symptoms.

Was she eating and drinking normally?  No.

How long had this been happening? Our cousin told us she was like this for several days.

Was she having accidents in the house?  Yes, a few times our cousin found some urine on the floor. She was accidentally peeing on the floor rather than waiting for someone to take her outside to use the bathroom.

Next, the vet took her vital signs, which are the important body functions (such as breathing, temperature and heartbeat).  The doctor listened to her heart and lungs with a stethoscope.  To take her temperature, the doctor inserted a thermometer into her anus (the opening at the behind above where the lowest part of the bowels are). The bowels are where we excrete solid food waste from our bodies. Earlier, they had weighed her on the scale.

Finally, the vet gave Maxine a physical examination. During this examination, the doctor found out that her urethra was very thick and her bladder was completely full. The bladder is a sac that holds urine and the urethra is a tube that carries urine out of the body.

The doctor ordered additional tests, including an x-ray and ultrasound.  The x-ray showed a lot of large stones in her bladder. These bladder stones were blocking the opening where the urine goes out of the body. Since her urethra was so thick, they also worried that she might have cancer. That night she stayed at the hospital, where they tried to insert a catheter in her bladder so the urine could be removed from her body.

The next day, we took her to see her normal doctor and he recommended we get her into surgery immediately to remove the stones and do a biopsy (= remove cells and tissue for testing) to find out if she had cancer.

We took Maxine to a specialty hospital and the next day she had the surgery. 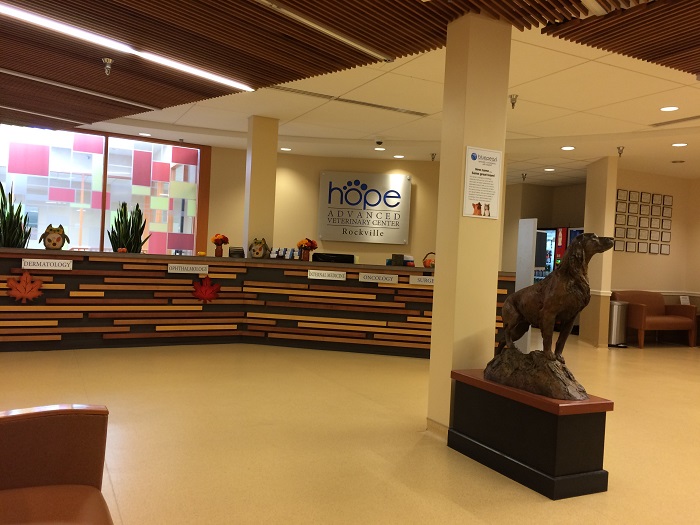 There were many different types of medical specialties at this hospital:

It was very stressful because my cousin was out of town the first week so I spent a lot of time at the hospital myself.  Just like at a hospital for humans, I sat for many hours in the waiting room.  As you can see in the photo below, it was a nice hospital with a television and free coffee, tea and hot chocolate. 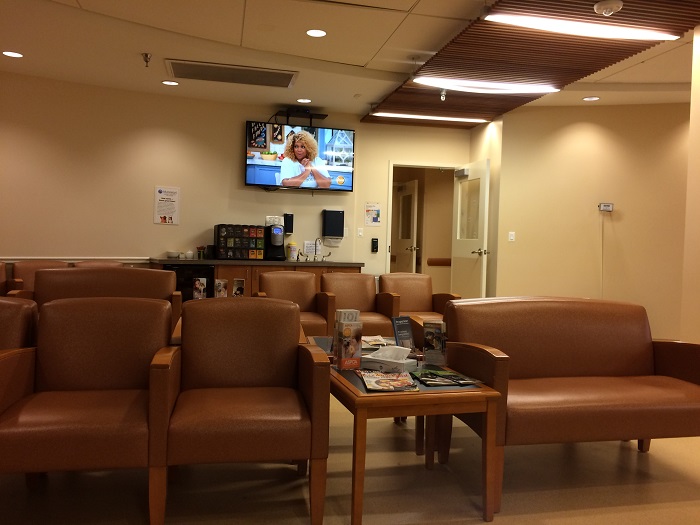 I also came back for visiting hours and stayed with Maxine in the intensive care unit (ICU) after she had surgery.

The photo in the first picture at the very top of the page, shows Maxine in her ICU cage. It was a metal cage and they put a nice blanket in it.  She had an intravenous drip (IV).  An IV allows liquid medication or fluids to flow directly into the patient’s veins.  The IV drip is the tube coming out of the little blue bandage attached to her paw in the top photo. 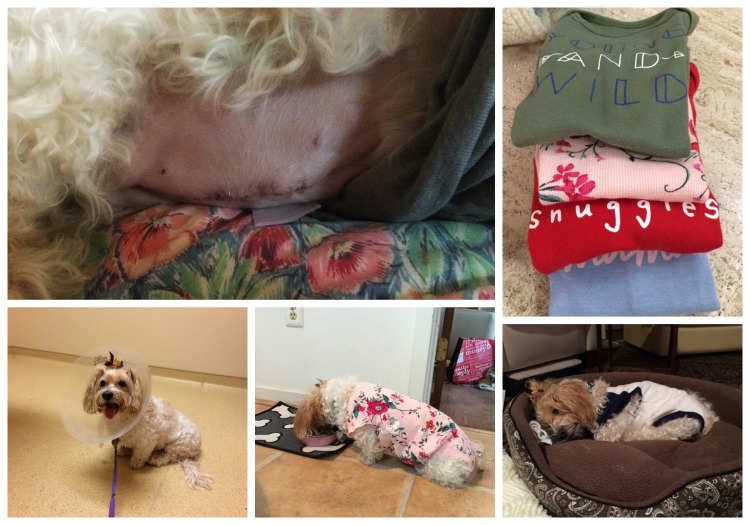 After several days in the ICU, she came home to recuperate (= return to normal health or strength after being sick).  During her recuperation, she was not allowed to run or jump and we had to keep her stitches clean and dry.

After they cut her body open to remove the bladder stones and do the biopsy, they used little staples to stitch up the opening of her surgical incision.  An incision is a cut into the body’s skin and tissue.  We sew or stitch up the incision with stitches, sutures or staples — You can see them in the picture above.  To keep her from licking or biting them, they put a cone around her head but she absolutely hated it. It’s uncomfortable and cumbersome (=difficult to get around, eat and drink).

So, we bought some baby onesies, which are little one-piece clothing jumpers for babies. These jumpers completely covered her abdomen so she couldn’t touch her stitches and we could take off the cone from around her head.  At the bottom of this clothing, there are little metal snaps that you can unfasten so you can easily change a baby’s diaper. We cut an opening for her tail. When she needed to go out to the bathroom, we just unsnapped the onesie very easily.  You can see the baby onesies in the photos above.

After two stressful weeks at the hospital and vet, she is doing much better. Also, her biopsy results came back from the lab and there was no cancer. Yay!  We were very relieved. However, Maxine got sick again with another bladder infection and had to take antibiotics. She’s doing better now.

Fortunately, my cousin had pet insurance because the doctor and hospital bills cost around $10,000.  I don’t know what we would have done if she didn’t have pet insurance. This shows how expensive medical care is in the United States… even for animals!

I’ve also created vocabulary videos on illnesses and pets on these pages if you would like to review or learn this vocabulary.

Your turn to practice

Has Your Pet Ever Visited the Animal Hospital?

Do you have a great story about your pet visiting the veterinarian or animal hospital? If not, what did you think about this story? This is your turn to develop your English writing skills.