TED Talk Transcript
Derek Sivers:  How to Start a Movement

So, ladies and gentlemen, at TED we talk a lot about leadership and how to make a movement.

So let's watch a movement happen, start to finish, in under three minutes and dissect some lessons from it.

First, of course you know, a leader needs the guts to stand out and be ridiculed. But what he's doing is so easy to follow. So here's his first follower with a crucial role; he's going to show everyone else how to follow.

Now, notice that the leader embraces him as an equal. So, now it's not about the leader anymore; it's about them, plural. Now, there he is calling to his friends.

Now, if you notice that the first follower is actually an underestimated form of leadership in itself. It takes guts to stand out like that.

The first follower is what transforms a lone nut into a leader.

And here comes a second follower. Now it's not a lone nut, it's not two nuts—three is a crowd, and a crowd is news. So a movement must be public.

Now we've got a movement.

So, notice that, as more people join in, it's less risky.

So those that were sitting on the fence before, now have no reason not to. They won't stand out, they won't be ridiculed, but they will be part of the in-crowd if they hurry. (Laughter)

So, over the next minute, you'll see all of those that prefer to stick with the crowd because eventually they would be ridiculed for not joining in. And that's how you make a movement.

But let's recap some lessons from this. So first, if you are the type, like the shirtless dancing guy that is standing alone, remember the importance of nurturing your first few followers as equals so it's clearly about the movement, not you.

Okay, but we might have missed the real lesson here.

The biggest lesson, if you noticed—did you catch it?—is that leadership is over-glorified.

That, yes, it was the shirtless guy who was first, and he'll get all the credit, but it was really the first follower that transformed the lone nut into a leader.

So, as we're told that we should all be leaders that would be really ineffective.

If you really care about starting a movement, have the courage to follow and show others how to follow. And when you find a lone nut doing something great, have the guts to be the first one to stand up and join in.

And what a perfect place to do that, at TED.

leader:  a person who controls or shows a group of people what to do.

leadership:  the state or position of controlling or guiding a group.

to dissect:  to cut or divide something into smaller parts or pieces.

to have guts / it takes guts: (idiom) to have the courage and determination to do something difficult or challenging.

to stand out:  to be easily seen and noticed by others.

to be ridiculed:  to be teased or laughed at by other people.

to follow:  to go behind or come along with someone.

follower:  a person who does things that someone else has done first.

role:  what a person does in a relationship or situation

to embrace:  to accept or agree to an idea or proposal.

an equal:  a person with the same quality, status or rights as another person.

to transform: to change something completely to something else.

a crowd: a large group of people.

to be public: to be visible or in the open so everyone can see.

to emulate: to try to do something like someone else.

momentum: a force or power that makes something move faster.

the tipping point (idiom): to point or moment that something changes.

to join in: to accompany, to be a part of something, to meet with others.

to sit on the fence (idiom): to not make a decision between two options.

the in-crowd (idiom): a group of people who are popular and other people want to be with or be like.

to hurry: to rush or go quickly.

to stick with the crowd: to be like other people and not be different. (antonym: to stand out from the crowd = to be different or unusual).

to recap: to summarize or to say again.

nurturing: encouraging something to develop or grow.

to catch something: to notice or see something.

over-glorified: making something more important than it really is.

to get the credit (idiom): to say someone is responsible for doing something (especially for something good or for an achievement).

ineffective: not having any effect or being able to do what you want to do.

to care about: to feel that something is important to worry about.

Now you can take the quiz to see if you can remember some of these phrases. 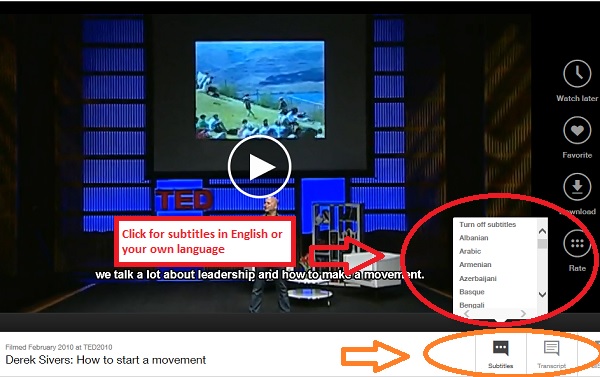 At the lower right-hand of the screen there is a drop-down menu that allows you to turn on subtitles (see screen shot below). Most TED talks have a number of different languages available in addition to English.