You can also watch the video on TED's website here.

David Gallo:  We're going to go on a dive to the deep sea, and anyone that's had that lovely opportunity knows that for about two and half hours on the way down, it's a perfectly positively pitch-black world. And we used to see the most mysterious animals out the window that you couldn't describe: these blinking lights -- a world of bioluminescence, like fireflies.

Dr. Edith Widder -- she's now at the Ocean Research and Conservation Association -- was able to come up with a camera that could capture some of these incredible animals, and that's what you're seeing here on the screen.

That's all bioluminescence. So, like I said: just like fireflies. There's a flying turkey under a tree. (Laughter)

I'm a geologist by training. But I love that. And you see, some of the bioluminescence they use to avoid being eaten, some they use to attract prey, but all of it, from an artistic point of view, is positively amazing.

And a lot of what goes on inside ... there's a fish with glowing eyes, pulsating eyes. Some of the colors are designed to hypnotize, these lovely patterns. And then this last one, one of my favorites, this pinwheel design. Just absolutely amazing, every single dive.

That's the unknown world, and today we've only explored about 3 percent of what's out there in the ocean. Already we've found the world's highest mountains, the world's deepest valleys, underwater lakes, underwater waterfalls -- a lot of that we shared with you from the stage.

And in a place where we thought no life at all, we find more life, we think, and diversity and density than the tropical rainforest, which tells us that we don't know much about this planet at all. There's still 97 percent, and either that 97 percent is empty or just full of surprises.

But I want to jump up to shallow water now and look at some creatures that are positively amazing. Cephalopods -- head-foots. As a kid I knew them as calamari, mostly. (Laughter)

This is an octopus -- this is the work of Dr. Roger Hanlon at the Marine Biological Lab -- and it's just fascinating how cephalopods can, with their incredible eyes, sense their surroundings, look at light, look at patterns. Here's an octopus moving across the reef, finds a spot to settle down, curls up and then disappears into the background. Tough thing to do.

In the next bit, we're going to see a couple squid. These are squid. Now males, when they fight, if they're really aggressive, they turn white. And these two males are fighting, they do it by bouncing their butts together, which is an interesting concept. Now, here's a male on the left and a female on the right, and the male has managed to split his coloration so the female only always sees the kinder gentler squid in him.

And the male ... (Laughter) We're going to see it again. Let's take a look at it again. Watch the coloration: white on the right, brown on the left. He takes a step back -- so he's keeping off the other males by splitting his body -- and comes up on the other side ... Bingo! Now I'm told that's not just a squid phenomenon with males, but I don't know. (Laughter)

Cuttlefish. I love cuttlefish. This is a Giant Australian Cuttlefish. And there he is, his droopy little eyes up here. But they can do pretty amazing things, too. Here we're going to see one backing into a crevice, and watch his tentacles -- he just pulls them in, makes them look just like algae. Disappears right into the background. Positively amazing.

Here's two males fighting. Once again, they're smart enough, these cephalopods; they know not to hurt each other. But look at the patterns that they can do with their skin. That's an amazing thing.

Here's an octopus. Sometimes they don't want to be seen when they move because predators can see them. Here, this guy actually can make himself look like a rock, and, looking at his environment, can actually slide across the bottom, using the waves and the shadows so he can't be seen. His motion blends right into the background -- the moving rock trick. So, we're learning lots new from the shallow water.

Still exploring the deep, but learning lots from the shallow water. There's a good reason why: the shallow water's full of predators -- here's a barracuda -- and if you're an octopus or a cephalopod, you need to really understand how to use your surroundings to hide.

In the next scene, you're going to see a nice coral bottom. And you see that an octopus would stand out very easily there if you couldn't use your camouflage, use your skin to change color and texture. Here's some algae in the foreground ... and an octopus. Ain't that amazing?

Now, Roger spooked him so he took off in a cloud of ink, and when he lands the octopus says, "Oh, I've been seen. The best thing to do is to get as big as I can get." That big brown makes his eyespot very big. So, he's bluffing.

Let's do it backwards -- I thought he was joking when he first showed it to me. I thought it was all graphics -- so here it is in reverse. Watch the skin color; watch the skin texture. Just an amazing animal, it can change color and texture to match the surroundings. Watch him blend right into this algae. One, two, three. (Applause)

And now he's gone, and so am I. Thank you very much.

pitch black:  no light, completely back.

firefly:  A flying insect that has bioluminescence.

glowing:  Giving off light or showing up in the dark.

pulsating:  to expand and contract in a rhythm.

hypnotize:  to put in a trance.

shallow:  near the surface, not deep.

reef:  a strip of rocks, sand or coral near the surface of the water.

coloration:  an arrangement or pattern of colors on something.

blend right into:  to match the background of something and see to disappear.

bluffing (verb: to bluff): to pretend that someone is stronger than it really is.

Now you can take the quiz to see if you can remember some of these phrases. 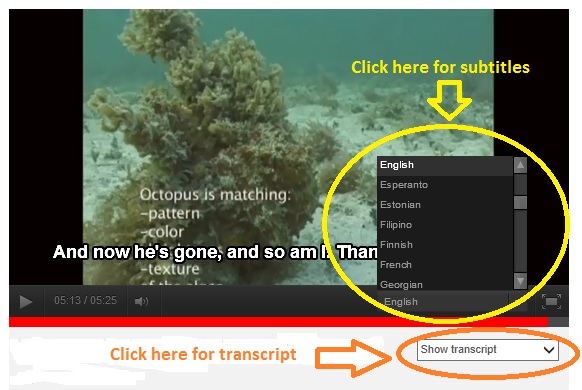