How to Form the Past Continuous Tense 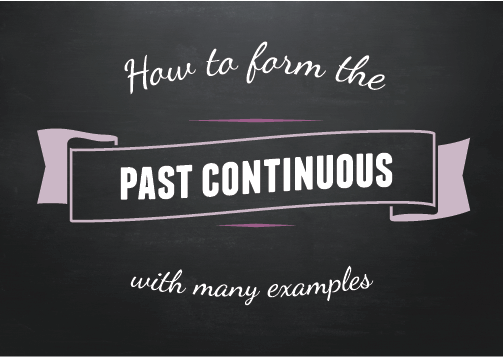 In this section, we'll look at how to form the past continuous in the affirmative, negative and question forms. I've included many examples to help make everything very clear. Before we get started, you may also hear this tense called the past progressive tense.

[Note: Click here to learn how to use  this tense.]

To form the past continuous, we use the was / were form of the verb "to be" plus  the infinitive of the verb plus  an -ing ending. 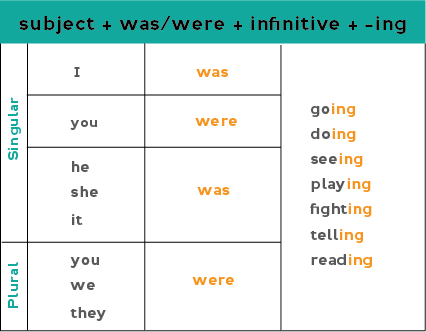 To make an affirmative (positive) statement negative, add "not" before the verb + -ing. You can also use a contraction (wasn't / weren't). We use contractions frequently in spoken  English. 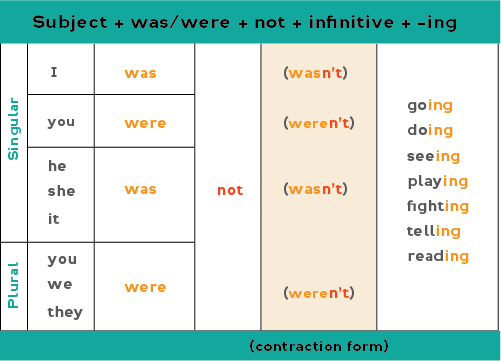 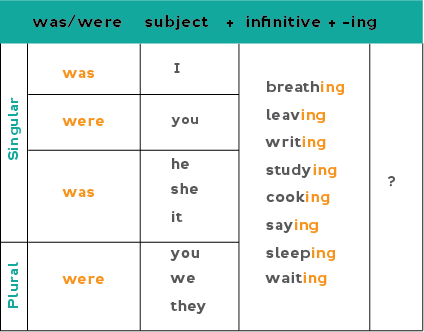 Questions that can be answered with "yes" or "no" answers are formed by inverting the subject and correct form of the verb "be" (was / were). (Inverting means we change the order of the subject and verb form:)

Affirmative statement:  I was sleeping. (the subject "I" is first, then the verb form "was")

Affirmative question:  Was I sleeping?  (to make a question, the verb form "was" comes first then the subject "I"). 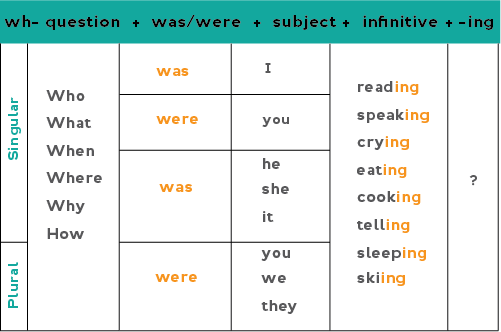 Be careful as there are also some spelling changes:

Spelling:  Verbs that end with one -e

With verbs ending with a long -e sound, add -ing as normal:

If the verb has one syllable and ends with CVC (a consonant + vowel + consonant), we double the final consonant before adding the -ing ending:

Notice these verbs end in CVC (consonant vowel consonant). However, do not double the consonant for verbs that end in w, x or y.

When verbs ending in ending in CVC (consonant vowel consonant) have two or more syllables, double the last consonant if the last syllable is stressed.

However, when the last syllable is not stressed, just add -ing as usual.

Check back for exercises that will help you practice the past continuous tense in its different forms.

Now that you've learned how to form the past continuous, click here to learn how to use it.