Hannah Brechner: I was one of the only kids in college who had a reason to go to the P.O. box at the end of the day, and that was mainly because my mother has never believed in email, in Facebook, in texting or cell phones in general.

And so while other kids were BBM-ing their parents, I was literally waiting by the mailbox to get a letter from home to see how the weekend had gone, which was a little frustrating when Grandma was in the hospital, but I was just looking for some sort of scribble, some unkempt cursive from my mother.

And so when I moved to New York City after college and got completely sucker-punched in the face by depression, I did the only thing I could think of at the time. I wrote those same kinds of letters that my mother had written me for strangers, and tucked them all throughout the city, dozens and dozens of them.

I left them everywhere, in cafes and in libraries, at the U.N., everywhere. I blogged about those letters and the days when they were necessary, and I posed a kind of crazy promise to the Internet: that if you asked me for a hand-written letter, I would write you one, no questions asked.

Overnight, my inbox morphed into this harbor of heartbreak -- a single mother in Sacramento, a girl being bullied in rural Kansas, all asking me, a 22-year-old girl who barely even knew her own coffee order, to write them a love letter and give them a reason to wait by the mailbox.

Well, today I fuel a global organization that is fueled by those trips to the mailbox, fueled by the ways in which we can harness social media like never before to write and mail strangers letters when they need them most, but most of all, fueled by crates of mail like this one, my trusty mail crate, filled with the scriptings of ordinary people, strangers writing letters to other strangers not because they're ever going to meet and laugh over a cup of coffee, but because they have found one another by way of letter-writing.

But, you know, the thing that always gets me about these letters is that most of them have been written by people that have never known themselves loved on a piece of paper. They could not tell you about the ink of their own love letters.

They're the ones from my generation, the ones of us that have grown up into a world where everything is paperless, and where some of our best conversations have happened upon a screen.

We have learned to diary our pain onto Facebook, and we speak swiftly in 140 characters or less.

But what if it's not about efficiency this time? I was on the subway yesterday with this mail crate, which is a conversation starter, let me tell you. If you ever need one, just carry one of these.

And a man just stared at me, and he was like, "Well, why don't you use the Internet?"

And I thought, "Well, sir, I am not a strategist, nor am I specialist. I am merely a storyteller."

And so I could tell you about a woman whose husband has just come home from Afghanistan, and she is having a hard time unearthing this thing called conversation, and so she tucks love letters throughout the house as a way to say, "Come back to me. Find me when you can."

Or a girl who decides that she is going to leave love letters around her campus in Dubuque, Iowa, only to find her efforts ripple-effected the next day when she walks out onto the quad and finds love letters hanging from the trees, tucked in the bushes and the benches.

Or the man who decides that he is going to take his life, uses Facebook as a way to say goodbye to friends and family. Well, tonight he sleeps safely with a stack of letters just like this one tucked beneath his pillow, scripted by strangers who were there for him when.

These are the kinds of stories that convinced me that letter-writing will never again need to flip back her hair and talk about efficiency, because she is an art form now, all the parts of her, the signing, the scripting, the mailing, the doodles in the margins.

The mere fact that somebody would even just sit down, pull out a piece of paper and think about someone the whole way through, with an intention that is so much harder to unearth when the browser is up and the iPhone is pinging and we've got six conversations rolling in at once, that is an art form that does not fall down to the Goliath of "get faster," no matter how many social networks we might join.

BBM-ing their parents:  Sending SMS text messages through Black Berry Messaging. A Black Berry is a brand of mobile phone.

scribble:  writing something quickly without being careful.

unkempt cursive:  cursive is a type of handwriting where the letters are connected together.

sucker-punched in the face:  A  sucker-punch is an unexpected blow or punch. The person does not see the punch coming.

tucked (past tense = tucked):  to tuck something is to push or fold something into another place.

the U.N.:  The United Nations (One of the headquarters is located in New York City)..

to morphed into:  to grow into something.

harbor:  (1) a place along the land where ships can stay safe from rough water and wind; (2) to give a home or shelter.

paperless:  without paper, not on paper.

efficiency: producing or doing something with little effort and cost.

unearth: to dig something up from under the earth (ground); bringing something into the open where people can see it.

Now you can take the quiz to test your understanding. 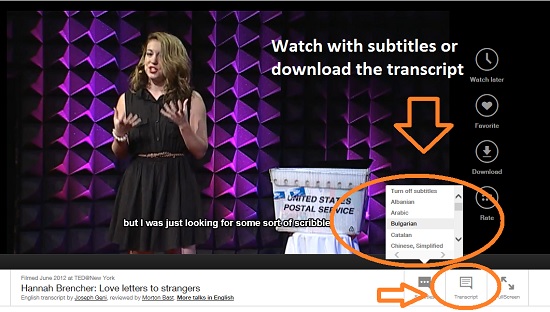 You can also watch this video on TED's website here: