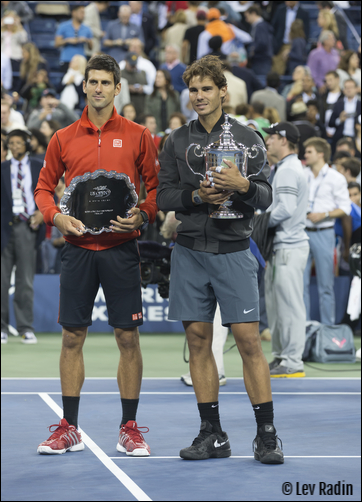 In this comparison of adjectives lesson, we're going to compare the tennis sensations Rafael "Rafa" Nadal and Novak "Nole" Djokovic.

Even if you're not a tennis fan, you can still learn some very important grammar in this lesson.

In the photo above, you'll see that both players were finalists at the 2013 US Open. You can probably guess who won by which player is holding the larger trophy. In case you don't know, Rafa is wearing the blue and black outfit with the Nike logos.

First of all, what exactly are comparative adjectives?

For example, as you can see in the photo:

The form of comparative adjectives depends on the base adjective.

–    Spelling note: for 1-syllable adjectives ending in one consonant, double  the consonant:

–    Longer words (with 2 or more syllables) use the word more instead of adding an ending to the adjective:

Rafael is older than Novak.

–    Use as ..... as with an adjective when two things or people are the same (or not the same). But, do not change the base form of the adjective when using as...as:

Novak is as popular in tennis as Rafael.

Novak is not as happy with his trophy as Rafael is.

Ready to practice with a little quiz?

(1) Create comparative forms of these adjectives:

How did you do on the quiz?  Who do you like better?  Do you play tennis better than your friends?  What things do you do better than other people you know.  Write your answers on a sheet of paper.

By the way, if you'd like to learn about superlative forms of adjectives, click here for another tennis lesson, this time with the best female players in 2013.