"Be going to" Form and Usage

We can express the future with "be going to + infinitive." In this section, we'll look at how to form the future simple using "going to" as well as when to use this tense.

To learn the differences between "be going to" and "will/shall" click here.

The infographic provides a good summary of "be going to" but let's take a closer look at the form and uses with more explanation and examples.

[Click here to download a PDF of this infographic. When printing, in the "fit" section, select "shrink to fit" to scale the entire infographic to fit on one page]

"Be going to" statements (affirmative and negative)

Forming this tense is rather simple:

Subject pronoun + the verb "be" + "going to/not going to" and the infinitive of the verb:

Here are some examples to make sure this is clear:

Remember, contractions are common in spoken and informal English.

Pronunciation Note:  When we speak, we also often say "gonna" instead of "going to."  We shorten and push the words together so that we can speak more quickly.

Questions using "be going to" form 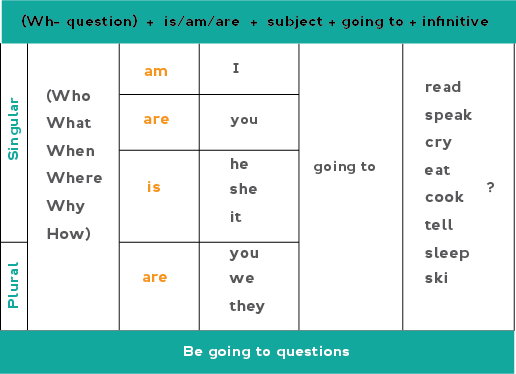 To form of questions, we invert the subject (e.g, I, you) and "is/am/are." If we use a wh- question word, we insert it at the beginning of the sentence.

Uses of "be going to"

There are two main uses of "be going to" + the infinitive.

We can use "going to" to describe a planned action that will happen in the near future. In this situation, we've already decided or planned this action.

Note:  We can also use the present continuous to talk about planned future arrangements. They are very close in meaning so it's possible to use either:

Sometimes learners wonder if the verb "go" can be used with "be going to" because it seems strange to repeat "go" twice. Yes, it is correct to use either form with the verb "go."

The only real difference is that using the present continuous (going to) is shorter than saying "going to go."

Prediction based on present situation

We can use "going to" to express a prediction  (a guess or estimate) about what may happen in the future based on what is happening right now.

As we've learned here, we use "be going to + infinitive" to describe future planned actions or to predict future actions or events.

Sometimes, it confuses learners that we can express the future in English in these ways:

As noted above, "be going to" and the present continuous have basically the same meaning when talking about the future. However, there are differences when using the future simple (will/shall) and present simple to describe the future.

I recommend you read this page to better understand these differences.