I was speaking to a group of about 300 kids, ages six to eight, at a children's museum, and I brought with me a bag full of legs, similar to the kinds of things you see up here, and had them laid out on a table for the kids.

And, from my experience, you know, kids are naturally curious about what they don't know, or don't understand, or is foreign to them.

They only learn to be frightened of those differences when an adult influences them to behave that way, and maybe censors that natural curiosity, or you know, reins in the question-asking in the hopes of them being polite little kids.

So I just pictured a first grade teacher out in the lobby with these unruly kids, saying, "Now, whatever you do, don't stare at her legs."

But, of course, that's the point. That's why I was there, I wanted to invite them to look and explore.

So I made a deal with the adults that the kids could come in without any adults for two minutes on their own.

The doors open, the kids descend on this table of legs, and they are poking and prodding, and they're wiggling toes, and they're trying to put their full weight on the sprinting leg to see what happens with that.

And I said, "Kids, really quickly — I woke up this morning, I decided I wanted to be able to jump over a house — nothing too big, two or three stories — but, if you could think of any animal, any superhero, any cartoon character, anything you can dream up right now, what kind of legs would you build me?"

And immediately a voice shouted, "Kangaroo!"

And other things that I don't — aren't familiar with. And then, one eight-year-old said, "Hey, why wouldn't you want to fly too?"

And the whole room, including me, was like, "Yeah." (Laughter)

And just like that, I went from being a woman that these kids would have been trained to see as "disabled" to somebody that had potential that their bodies didn't have yet. Somebody that might even be super-abled.

So some of you actually saw me at TED, 11 years ago. And there's been a lot of talk about how life-changing this conference is for both speakers and attendees, and I am no exception. TED literally was the launch pad to the next decade of my life's exploration.

At the time, the legs I presented were groundbreaking in prosthetics. I had woven carbon fiber sprinting legs modeled after the hind leg of a cheetah, which you may have seen on stage yesterday. And also these very life-like, intrinsically painted silicone legs.

So at the time, it was my opportunity to put a call out to innovators outside the traditional medical prosthetic community to come bring their talent to the science and to the art of building legs.

So that we can stop compartmentalizing form, function and aesthetic, and assigning them different values. Well, lucky for me, a lot of people answered that call. And the journey started, funny enough, with a TED conference attendee — Chee Pearlman, who hopefully is in the audience somewhere today. She was the editor then of a magazine called ID, and she gave me a cover story.

This started an incredible journey. Curious encounters were happening to me at the time; I'd been accepting numerous invitations to speak on the design of the cheetah legs around the world. And people would come up to me after the conference, after my talk, men and women.

And the conversation would go something like this, "You know Aimee, you're very attractive. You don't look disabled." (Laughter) I thought, "Well, that's amazing, because I don't feel disabled."

And it really opened my eyes to this conversation that could be explored, about beauty. What does a beautiful woman have to look like? What is a sexy body?

And interestingly, from an identity standpoint, what does it mean to have a disability? I mean, people -- Pamela Anderson has more prosthetic in her body than I do. Nobody calls her disabled. (Laughter)

So this magazine, through the hands of graphic designer Peter Saville, went to fashion designer Alexander McQueen, and photographer Nick Knight, who were also interested in exploring that conversation. So, three months after TED I found myself on a plane to London, doing my first fashion shoot, which resulted in this cover — "Fashion-able"?

Three months after that, I did my first runway show for Alexander McQueen on a pair of hand-carved wooden legs made from solid ash. Nobody knew — everyone thought they were wooden boots. Actually, I have them on stage with me: grapevines, magnolias — truly stunning.

Poetry matters. Poetry is what elevates the banal and neglected object to a realm of art. It can transform the thing that might have made people fearful into something that invites them to look, and look a little longer, and maybe even understand.

I learned this firsthand with my next adventure. The artist Matthew Barney, in his film opus called the "The Cremaster Cycle." This is where it really hit home for me — that my legs could be wearable sculpture. And even at this point, I started to move away from the need to replicate human-ness as the only aesthetic ideal.

So we made what people lovingly referred to as glass legs even though they're actually optically clear polyurethane, a.k.a. bowling ball material. Heavy!

Then we made these legs that are cast in soil with a potato root system growing in them, and beetroots out the top, and a very lovely brass toe. That's a good close-up of that one.
Then another character was a half-woman, half-cheetah — a little homage to my life as an athlete. 14 hours of prosthetic make-up to get into a creature that had articulated paws, claws and a tail that whipped around, like a gecko. (Laughter)

And then another pair of legs we collaborated on were these — look like jellyfish legs, also polyurethane. And the only purpose that these legs can serve, outside the context of the film, is to provoke the senses and ignite the imagination. So whimsy matters.

Today, I have over a dozen pair of prosthetic legs that various people have made for me, and with them I have different negotiations of the terrain under my feet, and I can change my height— I have a variable of five different heights. (Laughter)

Today, I'm 6'1". And I had these legs made a little over a year ago at Dorset Orthopedic in England and when I brought them home to Manhattan, my first night out on the town, I went to a very fancy party. And a girl was there who has known me for years at my normal 5'8". Her mouth dropped open when she saw me, and she went, "But you're so tall!" And I said, "I know. Isn't it fun?"

I mean, it's a little bit like wearing stilts on stilts, but I have an entirely new relationship to door jams that I never expected I would ever have. And I was having fun with it.

And she looked at me, and she said, "But, Aimee, that's not fair." (Laughter) (Applause) And the incredible thing was she really meant it. It's not fair that you can change your height, as you want it.

It can stand as a symbol that the wearer has the power to create whatever it is that they want to create in that space. So people that society once considered to be disabled can now become the architects of their own identities and indeed continue to change those identities by designing their bodies from a place of empowerment.

And what is exciting to me so much right now is that by combining cutting-edge technology -- robotics, bionics — with the age-old poetry, we are moving closer to understanding our collective humanity. I think that if we want to discover the full potential in our humanity, we need to celebrate those heartbreaking strengths and those glorious disabilities that we all have.

It is our humanity, and all the potential within it, that makes us beautiful. 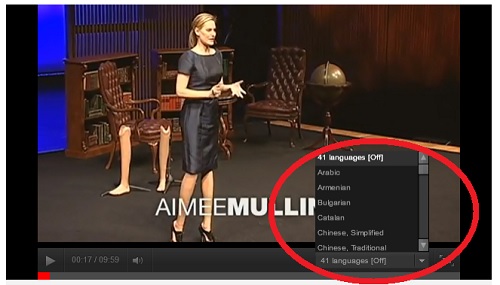